2019 Recap: The Year In Showbiz, From Controversies To Viral Moments 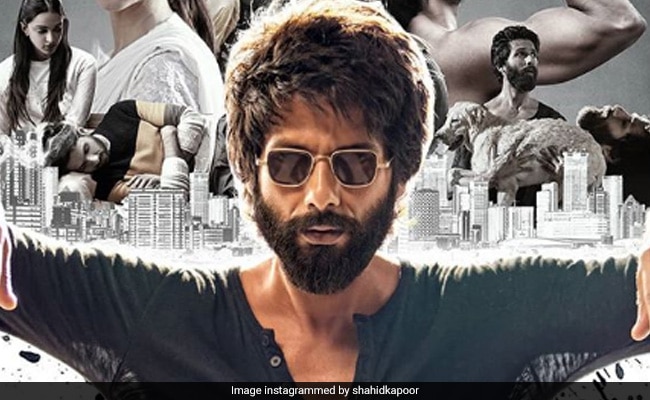 It seems like 2019 just flashed right past us, without once stopping to smell the roses. It was a great year to be Ayushmann Khurrana and Vicky Kaushal, both of whom starred in hit films and were feted with National Awards; some other stars, however, found themselves the subject of headlines that were less than flattering. January dove headfirst into controversy - actress Kangana Ranaut and director Krish were daggers drawn over Manikarnika credits; and an episode of Karan Johar's talk show Koffee With Karan featuring cricketers Hardik Pandya and KL Rahul became almost too hot to handle. Manikarnika, a biopic of Rani Laxmibai of Jhansi, was completed by Kangana after Krish quit as director; the feud became public after they clashed over who ought to be credited as 'primary' director of the film.

Manikarnika was a minor hit and the Kangana vs Krish tangle was largely confined to accusations traded in interviews. For cricketers Hardik Pandya and KL Rahul, the consequences of the comments - widely slammed as misogynistic and offensive - they made on Koffee With Karan were more real; both were hit with disciplinary action by the BCCI and host Karan Johar later said in an interview with ET Now that he felt 'responsible' and that the show had 'gone into a zone beyond (his) control.'

Controversy continued to show its face through the year. Navjot Singh Sidhu was eventually replaced by Archana Puran Singh on The Kapil Sharma Show after outrage over his comments on the Pulwama attack. South actor Radha Ravi was suspended by the DMK for making sexist remarks about actress Nayanthara. Bigg Boss Tamil contest Saravanan was ousted from the show after confessing to having groped women on buses - an admission that was compounded by his seeming lack of remorse and host Kamal Haasan's flippant response. Kabir Singh, a remake of Telugu hit Arjun Reddy, released to tremendous box office numbers despite being savaged by critics for its toxic and misogynistic view of romance. Actor Vivek Oberoi was called out by women's bodies for circulating an offensive meme that involved his alleged ex-girlfriend Aishwarya Rai Bachchan. Actress Zaira Wasim announced that she was quitting her acting career, citing religion as her reason. A contestant forcibly kissed Indian Idol 11 judge Neha Kakkar. And for the better part of a month, the Internet was transfixed by a family feud in which Sunaina Roshan, daughter of Rakesh and sister of Hrithik, levelled allegations of assault and abuse against her parents and brother, her claims bolstered by tweets from Rangoli Chandel, the sister of long-time Roshan enemy Kangana Ranaut.

This was also the year that Bollywood failed to stand by the pledges it made during the #MeToo movement in 2018. Rape accused Alok Nath showed up in De De Pyaar De, starring Ajay Devgn, and Aamir Khan rehired director Subhash Kapoor, currently fighting sexual misconduct charges in court, for the film Mogul. Both Aamir and Ajay had publicly committed not to work with alleged sexual predators. Hrithik Roshan's similar pledge was also invalidated after Vikas Bahl's directing credits were restored for Super 30 - he was given a clean chit in a sexual harassment investigation despite a reported failure to follow due process. Worse, Bollywood seemed to be falling over itself to rehabilitate men accused of terrible behaviour - both Ajay and Aamir rationalised the gap between word and deed, and a picture of Vikas Bahl at a lunch party attended by several to stars, among them Hrithik, prompted pointed criticism online.

There were some rays of light among these gloomy clouds, some attempts at redemption. Anu Malik, accused of sexual harassment, was replaced by Himesh Reshammiya as a judge on Indian Idol. A rape joke in Pati Patni Aur Woh was deleted before release. Pictures of Deepika Padukone at #MeToo accused director Luv Ranjan's house prompted the hashtag #NotMyDeepika, which urged the actress not to work with Mr Ranjan - she appears to have taken note.

Two women, in particular, made headlines for speaking their mind. Singer Sona Mohapatra attacked Salman Khan, calling him the 'poster child for toxic masculinity,' after he took a dig at Priyanka Chopra, yet again, for quitting his film Bharat. Bharat, Salman Khan told Mumbai Mirror, was a film that many would consider 'leaving their husbands for' - Priyanka's exit from the movie, that released this year, was attributed to her impending wedding to Nick Jonas. Some months after Sona Mohapatra's tweets on Salman, South star Parvathy went viral for taking the misogyny and glorification of violence in Kabir Singh and Arjun Reddy apart at a roundtable with other actors. Among them was Arjun Reddy star Vijay Deverakonda, who later said he was 'irritated' by the backlash against his film. 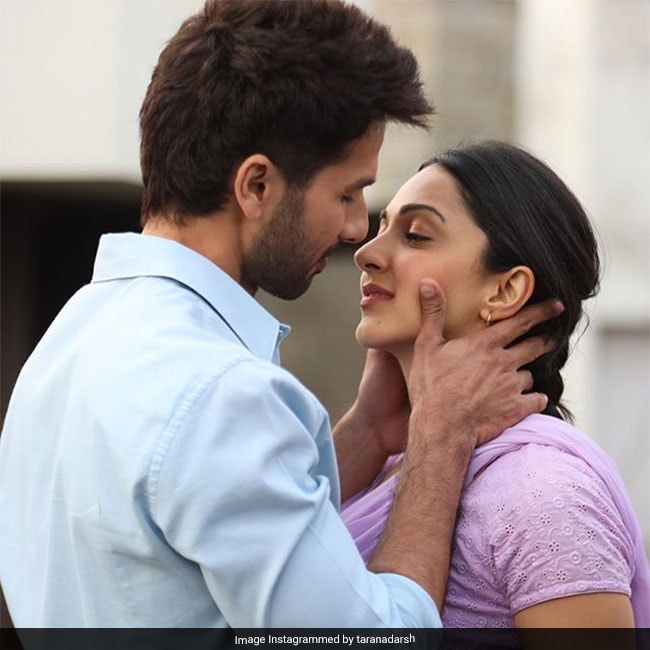 Shahid Kapoor and Kiara Advani in a still from Kabir Singh

There were other reasons to smile in 2019. The menstruation-themed Period. End Of Sentence, set in India, won the Oscar for Best Documentary Short. India went to the International Emmys with several nominations for Sacred Games, Lust Stories, Radhika Apte and others. They didn't win - Sacred Games star Nawazuddin Siddiqui's other nominated drama McMafia did win - but it was a moment of pride anyway. Priyanka Chopra, Deepika Padukone, Aishwarya Rai Bachchan, Sonam Kapoor, Kangana Ranaut and other actresses continued to shine on international red carpets at the Met Gala and the Cannes Film Festival. Rishi Kapoor came home, cancer-free, from New York. Several rumoured couples made it official, notably Malaika Arora and Arjun Kapoor. Irish rock icons U2 and pop star Katy Perry played their first ever India concerts in Mumbai. 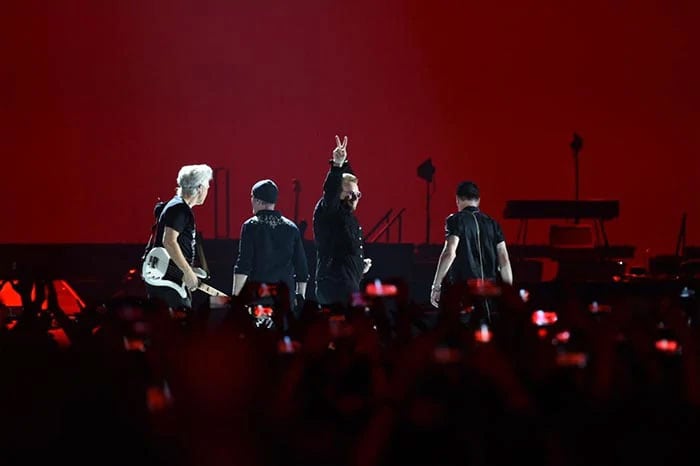 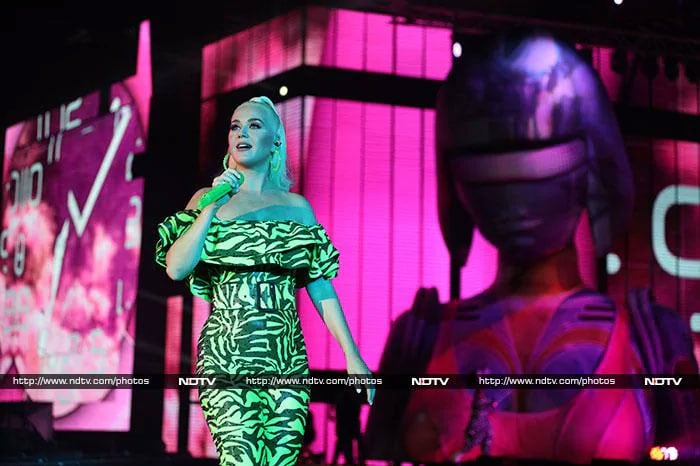 Katy Perry rocked Mumbai with her first ever performance here

The viral story of the year was Ranu Mondal, who quickly became Internet-famous after she was filmed singing an old Lata Mangeshkar hit at a railway station in West Bengal. She soon went from rail platform to a recording studio, courtesy Himesh Reshammiya. Her success, however, was diluted - Salman Khan had to counter reports that he had given Ranu Mondal a flat; her daughter went public denying that she had abandoned her mother; and the Internet swiftly turned on Ms Mondal after video footage of her telling off a fan for tapping on her shoulder went viral.

Epic Blockbuster song Teri Meri Kahani from Happy Hardy And Heer for all of you in 5 parts, thanks for all your love and support, Check out part 4 #happyhardyandheer #terimerikahani #titlesong #song #film #movie #bollywood #instasong #trending

For a fraught week or two in November, India held its breath as iconic singer Lata Mangeshkar struggled on a ventilator in hospital. She was finally discharged and the country exhaled.

Overjoyed to hear the good news that My ‘choti behen' Lata, is feeling much better and is at her home now. Please take good care of yourself @mangeshkarlatapic.twitter.com/Cf2hXmiGc1

As the year unspools to its inevitable conclusion, here's to new beginnings.