Krushna Abhishek said, "I would only be able to comment after having a word with the channel" 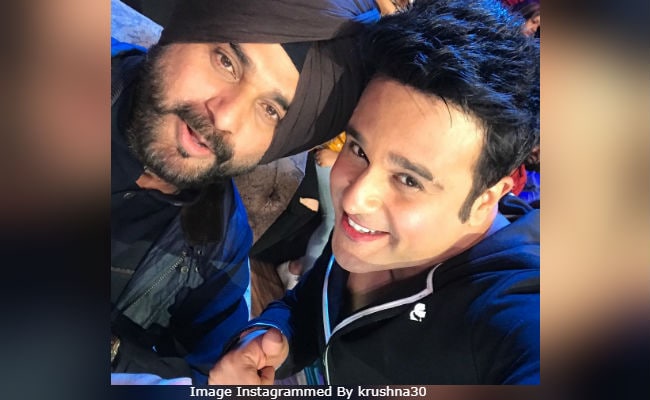 Is Archana Puran Singh actually replacing Navjot Singh Sidhu on The Kapil Sharma Show? "Cannot comment until I have a word with the channel," Krushna Abhishek, who plays a pivotal role in Kapil's show, said at a recent media event, DNA reports. Over the weekend, it was reported that Archana Puran Singh has entered The Kapil Sharma Show in place of Navjot Singh Sidhu, who was criticised severely on social media for his remark on the Pulwama terror attack. However, it is not yet clear if Ms Singh is replacing Mr Sidhu temporarily or permanently. "We have already shot a few episodes with Archana Puran Singh. But, Archana has told some media house that she hasn't yet signed the full contract. I would only be able to comment after having a word with the channel," Krushna was quoted by DNA as saying.

Reports state that Archana Puran Singh has replaced Navjot Singh Sidhu because he had prior commitments and, later, a tweet by Sony TV also confirmed that she will be joining the show. However, the tweet did not reveal if she is actually replacing Mr Sidhu.

We welcome Archana Puran Singh on #TheKapilSharmaShow, next Sunday! @apshaha@KapilSharmaK9@kikusharda@Krushna_KAS@bharti_lalli@sumona24@RochelleMRao@trulyedward@haanjichandan@Banijayasiapic.twitter.com/NWFDxp9VcT

Condemning the Pulwama attack, in which 40 CRPF soldiers were killed, Navjot Singh Sidhu, who is also a minister in the Punjab government, had said: "For a handful of people, can you blame the entire nation and can you blame an individual," news agency PTI reported. His comment created a storm on social media and soon, Twitter demanded an immediate ban on Kapil's show or removal of Navjot Singh Sidhu as the show's permanent guest.

Of the entire controversy, the show's frontrunner Kapil Sharma recently said that "banning or sacking Navjot Singh Sidhu is not a solution." Kapil's statement left Twitter fuming and #BoycottKapilSharma trended all of Tuesday. "These are very petty things, or can also be part of propaganda. I feel banning someone or sacking Navjot Singh Sidhu from the show is not the solution. If removing Sidhuji would have been a permanent solution, then he would have himself walked out of the show. We need to look for a permanent solution," Kapil had said, DNA and The Times Of India reported.