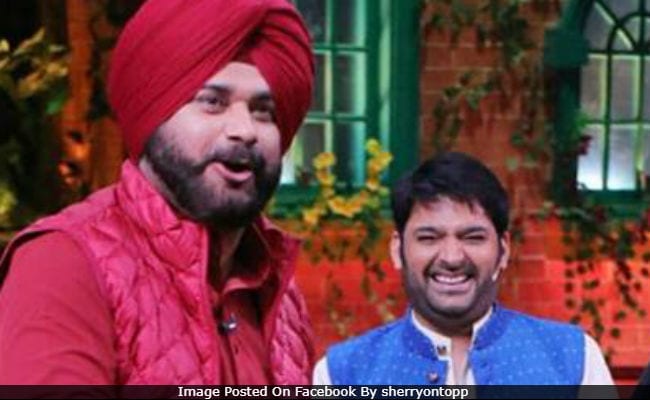 A day after Kapil Sharma reportedly said at an event in Chandigarh that 'banning or sacking' Navjot Singh Sidhu from his comedy series The Kapil Sharma Show because of Mr Sidhu's comments on the Pulwama terror attack is 'not a solution,' Twitter is baying for blood. #BoycottKapilSharma is the top trend on Twitter today, despite a section of social media speaking out in support of Kapil Sharma. Controversy has raged around Navjot Singh Sidhu, who is a minister in the Punjab government as well as a TV personality, over comments he made after 40 CRPF personnel were killed in Pulwama last week.

On Saturday, Archana Puran Singh stepped in on The Kapil Sharma Show in place of Mr Sidhu, although it is not clear if this is a temporary or permanent posting. DNA and Times Of India report that at an anti-drug event in Chandigarh yesterday, Kapil Sharma said, "These are very petty things, or can also be part of propaganda. I feel banning someone or sacking Navjot Singh Sidhu from the show is not the solution. If removing Sidhuji would have been a permanent solution, then he would have himself walked out of the show. We need to look for a permanent solution."

Many on Twitter have not taken kindly to what others have pointed out is a very measured response from the comedian. #BoycottKapilSharma is today's top trend, courtesy tweets such as "#BoycottKapilSharma, this time he has lost it completely" and "where does this arrogance comes from, Kapil?"

Last week, Navjot Singh Sidhu said about the Pulwama attack: "For a handful of people, can you blame the entire nation and can you blame an individual?" news agency PTI reported. He also added, "It (the attack) is a cowardly act and I condemn it firmly. Violence is always condemnable and those who did it must be punished."

Social media turned almost instantly on The Kapil Sharma Show, demanding that Mr Sidhu be dropped or the series banned. On Saturday, it was reported that Navjot Singh Sidhu had been replaced by Archana Puran Singh because he had prior commitments and, later, Sony TV also confirmed that Archana Puran Singh will be joining the show. However, the tweet did not reveal if she would actually be replacing Navjot Singh Sidhu.

We welcome Archana Puran Singh on #TheKapilSharmaShow, next Sunday! @apshaha@KapilSharmaK9@kikusharda@Krushna_KAS@bharti_lalli@sumona24@RochelleMRao@trulyedward@haanjichandan@Banijayasiapic.twitter.com/NWFDxp9VcT

Over the weekend, the Federation of Western India Cine Employees (FWICE) also issued a statement to Sony Entertainment Television and said that the cricketer-turned-politician should apologise for his comments. "In social and national interest, on behalf of five lakh workers of the FWICE, we request you to kindly ban him from The Kapil Sharma Show until he submits his unconditional apology to the nation and martyrs, who sacrificed their lives while on duty for the nation," the statement said, PTI reported.