Nawazuddin Siddiqui checked into the awards with Team Sacred Games and was spotted celebrating with the team of Best Drama McMafia. 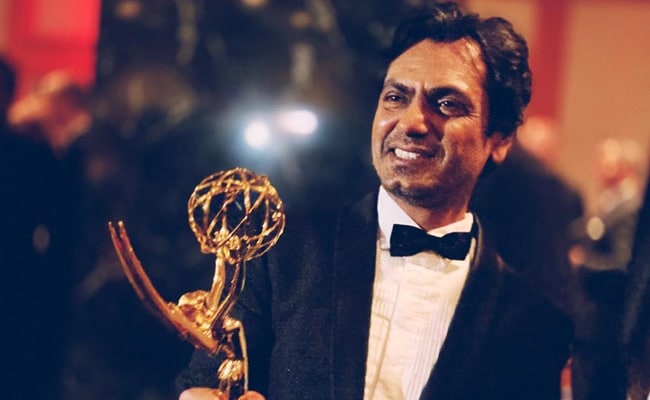 Wait, did we say no wins for India at the International Emmy Awards held in New York? Scratch that - Nawazuddin Siddiqui had the singular distinction of starring in two shows competing against each other for Best Drama Series and he literally had the best of both worlds: Nawazuddin walked the red carpet representing Sacred Games, and went on stage as part of the winning team of UK show McMafia. Nawazuddin Siddiqui, 45, plays Mumbai gangsters in both Sacred Games, in which he stars as mafia don Ganesh Gaitonde, and McMafia, in which he appears as Dilly Mahmood, the Indian partner of the London-based son of a Russian crime lord. After the International Emmys, Nawazuddin celebrated the win with the show's director James Watkins and producer Dixie Linder.

Tagging his McMafia co-stars, Nawazuddin wrote in a post: "It's a pure delight to be receiving the beautiful winner trophy at the International Emmy Awards Gala in New York with one of my favourite directors James Watkins for our work McMafia. Congratulations, James Norton, David Strathairn, Merab Ninidze, Oshri Cohen and Team McMafia." James Norton plays the protagonist - the son of a Russian criminal father who gets dragged into the dangerous world of his family business.

It's a pure delight 2 b receiving d beautiful winner trophy at d #InternationalEmmyAwards2019 Gala in NewYork wid 1 of my fav Director #JamesWatkins for our work #McMafia
Congratulations @jginorton#DavidStrathairn@CubaPictures#HosseinAmini & Team @iemmys@BBC#BestDramaSeriespic.twitter.com/miwOoL8EFO

McMafia, which premiered on BBC in the UK and on AMC in USA in January 2018, aired in India on Zee Cafe. It is based on the 2008 book McMafia: A Journey Through the Global Criminal Underworld by journalist Misha Glenny. McMafia season 1 released as an eight episode series. BBC has announced a second season of the show but the release date has not been finalised yet.

In an interview with news agency IANS earlier, Nawazuddin Siddiqui shared that director James Watkins cast him in McMafia after seeing his performance in Gangs of Wasseypur: "James Watkins has been following me since Gangs of Wasseypur and it is my performance in this movie, along with Miss Lovely and The Lunchbox, that eventually helped me bag my role in McMafia. Watkins is an experienced and passionate director and has also directed a few episodes of Black Mirror. He is somebody who keeps a keen eye for detail and beautifully brings out the smallest element in each shot. On McMafia, the overall experience was great, not just working with the director but all the other actors who were a part of the show."

Ahead of the awards, Nawazuddin Siddiqui was spotted hanging out with his Sacred Games co-stars Kubbra Sait and Radhika Apte and directors Anurag Kashyap and Vikramaditya Motwane.

And this happened after the awards:

The nominations for the International Emmys were announced in September, which fetched nods for India in five separate categories. The Remix was nominated for the Best Non-Scripted Entertainment award, which eventually went to The Real Full Monty: Ladies' Night. Apart from Sacred Games as a Best Drama Series contender, Radhika Apte had a Best Actress nomination for Lust Stories. The award went to Marina Gera for Orok Tel. Lust Stories was also nominated in the TV Movie/Mini-Series category, which was won by the series Safe Harbour. The caste violence-themed Witness: India's Forbidden Love was up for Best Documentary and the award went to Bellingcat - Truth In A Post-Truth World.