"I don't care what you think of the film, misogyny or the interview," said Vijay Deverakonda 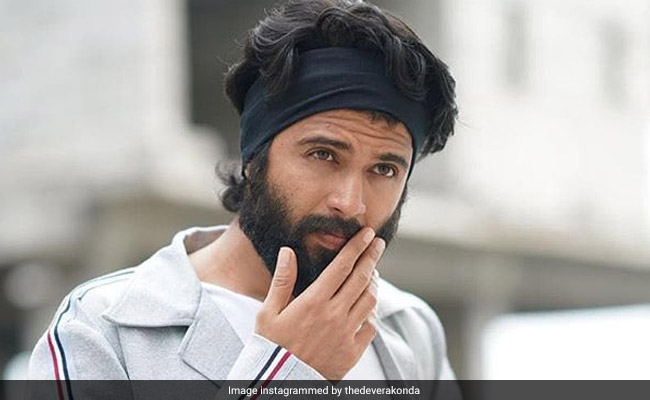 Just days after actress Parvathy was hailed by the Internet for her honest comments about 2017 film Arjun Reddy, the film's actor Vijay Deverakonda, present at the International Film Festival of India in Goa, said: "I am very irritated right now. I can't keep it in and I want to take it out. If I will keep it in, it will become a tumour inside me," reported news agency IANS. Telugu film Arjun Reddy and it's Bollywood remake Kabir Singh (released earlier this year), have been accused of extreme misogyny and slammed for glorifying violence, something which Parvathy added her own views to in an interaction with Film Companion's Anupama Chopra. Also present at the gathering were Vijay Deverakonda among other stars. Talking about Arjun Reddy, the very outspoken Parvathy said on the show: "I, as an actor, cannot really stop a director from doing that but I can choose not to be a part of that film," for which she has been cheered on by netizens on Twitter.

Now, speaking at the film festival in Goa on Wednesday, Vijay said: "Normally, I am very understanding. I give people the benefit of doubt. I saw that there was a genuine angst and genuine intention behind these questions. But these people don't know what they are talking about. I feel they are very misplaced. I didn't mind the question. I love Parvathy. I admire her work. What irritates me is social media and media 'hadavidi'. People go nuts. They don't know what they are talking about," IANS quoted him as saying.

Vijay also added that the only "issue" that's bothering him currently is: "I dislike that people are celebrating at my cost. That's my issue. I don't care what you think of the film, misogyny or the interview," IANS reported.

On Anupama Chopra's show, Parvathy was speaking in the presence of actors such as Deepika Padukone, Alia Bhatt, Manoj Bajpayee, Ranveer Singh, Vijay Sethupathi, Ayushmann Khurrana and Vijay Deverakonda, when she brought in a reference to the recently released film Joker to make a point: "Arjun Reddy or Kabir Singh, both had the visual grammar of glorification. Joker did not. Joker literally just showed us. Like facts, facts, facts. These all things happened. That's why it's like this."

Parvathy elaborated on her point as she added: "Now, we can watch a tragedy and leave it there without feeling inspired to follow it. Whereas, you are telling that there's no passion in relationship without slapping each other. And I see the comments on YouTube on that, where people are resonating and engaging with that. Also what you can see is they are engaging with the wrong thing in a massive mob like manner, where you are inciting violence. That's kind of murky. That's a murky space and I can't be the judge of how to fix that. And that's a bipolar behaviour and that's scary to me. People get affected by that and we got to be a little responsible. I, as an actor, cannot really stop a director from doing that but I can choose not to be a part of that film."

When asked by Anupama Chopra about playing a character like Arjun Reddy, Vijay Deverakonda started by saying he doesn't "want to justify" his role and asked viewers to consider a "broader" scenario: "If you think of it broadly... I don't want to justify it but it is possible that if a couple are completely in love and they give each other little hits and stuff and they completely understand and they are still in love. There might be the other case when as I kid I saw my parents - my father abusing my mother - when I come from a background like that and see a film like Arjun Reddy, it's scary."

"I can't make a film for everybody's personal lives. The director is making what he truly believes in," he added.

Meanwhile, Parvathy was called out for casually using the term "bipolar disorder" during the discussion, her response to which increased her fan following further: "It was a wrong choice of words and I stand corrected. This is important as I myself have been trying to unlearn usages that allow using grave mental disabilities as a mere "adjective" to explain a situation."

Hi Divya! Came across this comment. Thank you! It was a wrong choice of words and I stand corrected. This is important as I myself have been trying to unlearn usages that allow using grave mental disabilities as a mere "adjective" to explain a situation.