Lok Sabha Election Results 2019: More than 10 lakh polling stations would be set up to conduct polls.

Lok Sabha election 2019, which started in April following a lot of pre-poll action, is drawing to an end. Election results are scheduled to be declared on May 23. The counting of votes will take place just days after the final phase of voting on May 19. According to Indian General Election schedule, the national election is being held in seven phases - on April 11, April 18,  April 23, April 29, May 6, May 12 and May 19. This election will choose the 17th Lok Sabha. The members of the largest party or coalition will then choose the Prime Minister. The two major national parties of India – the BJP and the Congress - have launched their manifestos. While the BJP calls it "Sankalp Patra", the Congress has pitched it as the voice of Indians. The BJP manifesto promises emphasis on national security, zero tolerance against terrorism and the creation of sustainable job opportunities. The manifesto reiterated the party's causes - a Ram temple in Ayodhya and the scrapping of Article 370, 35A dealing with special status to Jammu and Kashmir. Tax breaks for the middle class, welfare schemes for farmers, Rs 100 lakh crore investment in infrastructure are some its other poll promises.

The Congress, in its manifesto headlined the Nyuntam Aay Yojana (NYAY) scheme, which promises Rs 72,000 a year for 20 per cent of India's poorest. The opposition party promises farm loan waiver in other states on the pattern of Chhattisgarh, Madhya Pradesh, and Rajasthan. It also promises to review and replace the current Goods and Services Tax (GST) laws with a "GST 2.0 regime" based on a single, moderate, standard rate of tax on all goods and services.

This year, more than 10 lakh polling stations would be set up to conduct the Lok Sabha election 2019, which is a new world record. Here's how you can check your name in voter list. This general election will see nearly 2,000 parties and over 8,000 candidates contesting for 543 seats.

The first phase of Lok Sabha elections, that took place on Thursday last week, saw a voter turnout of of 69.43 per cent. A total of 91 Lok Sabha constituencies spread across 18 states and two Union territories had gone for polls in the first phase. The second phase of the Lok Sabha elections, that took place on April 18, saw 66 per cent voting. Bengal saw highest voting percentage of 76 per cent. Over 1,600 candidates contested on 95 seats in general election Phase 2.

Overall voter turnout for fourth phase was 64 per cent. Voting in Odisha was highest with 68 per cent and lowest in Jammu and Kashmir being 10.5 per cent. Phase 5 saw voting percentage of 63.5 per cent. The sixth phase of Lok Sabha polls saw a turnout of 63.3 per cent where voting took place on 59 seats.

In the 2014 Lok Sabha election, the overall turnout was recorded at 66.44 per cent across all the nine phases. 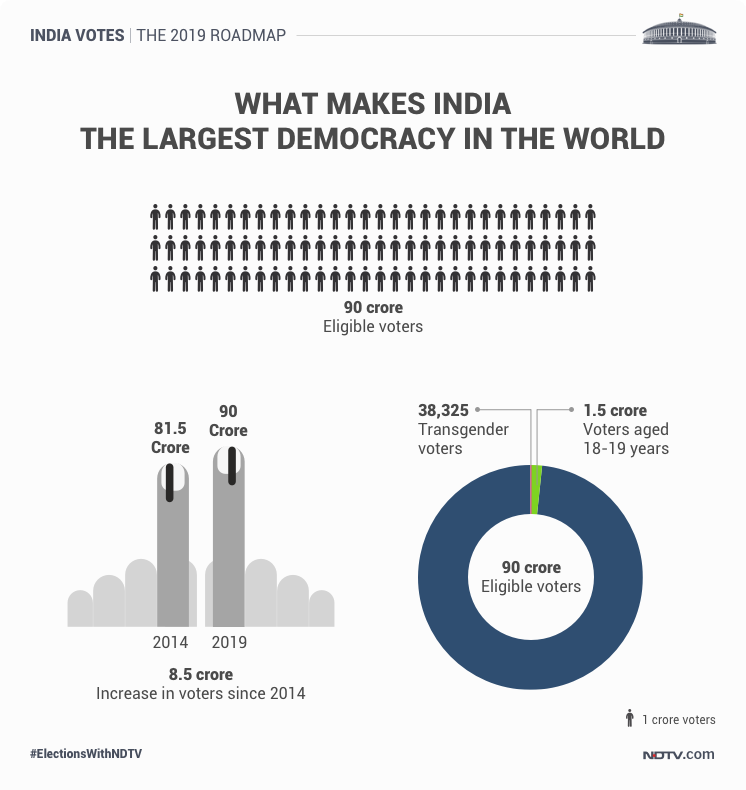 In 2014 Lok Sabha election, Narendra Modi-led BJP had won 282 seats out of 543 constituencies in Lok Sabha, handing out a crushing defeat to the 10-year-rule of Congress-led United Progressive Alliance.

Around 90 crore people are eligible to vote this time, the Election Commission has said. The number is an increase of about 9 crore compared to last time. It is estimated that about 13 crore voters this time will be first-time voters. The actual number of people who do vote, however, is far less. Even though 2014 saw the highest turnout ever in independent India's history at 66.4 per cent, it meant a huge 27.3 crore people did not vote. Two-thirds of Indians are under 35. The model code of conduct is already in place. It is a set of guidelines that candidates, and political parties and governments must follow to keep elections fair.

When are Lok Sabha election 2019? What are the poll dates, election schedule?

The Lok Sabha elections will take place in seven phases.

Who are the candidates in BJP's first list for Lok Sabha Elections 2019?

The central election committee of the Bharatiya Janata Party has released the list of candidates for the upcoming Lok Sabha elections.

You can refer to full list of BJP candidates for Lok Sabha elections 2019 here.

Who are the candidates in Congress' first list for Lok Sabha Elections 2019?

The Congress has so far released several lists for the 2019 polls.

Who is contesting from my constituency?

To know the candidates fighting the national election from your area, check the full list of candidates here.

Who are the new entrants in BJP for Lok Sabha election 2019?

2. Veteran actor Biswajit Chatterje e joined the Bharatiya Janata Party. The 83-year-old Biswajit Chatterjee is likely to contest the Lok Sabha elections from West Bengal, where the BJP has been looking for some prominent faces.

3. Bollywood actor Isha Koppikar joined the BJP. She has been appointed as the working president of the BJP's women transport wing.

6. Aparajita Sarangi, a former IAS officer of the Odisha cadre, joined the BJP.

7. Deepa Malik, a noted para athlete, joined the BJP with the party asserting that her presence will strengthen the organisation.

8. Veteran actor and former lawmaker Jaya Prada joined the BJP. She has been pitted against Samajwadi Party's Azam Khan on the Rampur constituency in Uttar Pradesh.  Jaya Prada had represented Rampur twice in the Lok Sabha -- in 2004 and 2009 -- as a member of the Samajwadi Party.

10. Retired IPS officer Prakash Mishra whose removal as Odisha police chief in 2014 had triggered a major controversy joined the BJP ahead of the Lok Sabha and Assembly elections in the state.

11. Former vice chief of army staff Lieutenant General (retd) Sarath Chand joined the BJP. He was commissioned into the Garhwal Rifles in June 1979 and retired as vice chief of Indian Army on June 1 last year. He has been in active combat leadership roles at every stage of command in the army.

12. Actor Sunny Deol has joined the BJP. He is likely to be the BJP candidate from Gurdaspur in Punjab.

13. Hairstylist Jawed Habib joined the BJP. Jawed Habib is considered one of the best hairdressers in the world and currently has over 550 hair salons across India, including three overseas.

14. Kirori Singh Bainsla, who led the Gujjar agitation in Rajasthan, joined the BJP.

Who are the new entrants in Congress for Lok Sabha election 2019?

Congress has introduced some fresh faces this election season. They are:

1. Weeks before the national election, film star Urmila Matondkar joined the Congres.  She is expected to be a Congress candidate in Mumbai in the general election next month.

2. Patidar leader Hardik Patel, who shot to fame by spearheading a quota stir in Gujarat, joined the Congress.

3. Veena Sendre, a transgender activist who shot to fame last year after winning a beauty pageant, joined the Indian National Congress in Chhattisgarh.

5.Vijender Singh, the first Indian boxer to win an Olympic medal, as joined the Congress and will be contesting from the South Delhi constituency.

From where will PM Modi contest Lok Sabha elections in 2019?
Prime Minister Narendra Modi will contest from Varanasi for Lok Sabha polls.

Who all are contesting in Elections 2019 from BJP and Congress?

Who are the top candidates or heavyweights in first phase of Lok Sabha Elections 2019?

Several union ministers including Nitin Gadkari, Kiren Rijiju and VK Singh are the heavyweight candidates for Phase of Lok Sabha elections 2019. Congress's Renuka Chowdary and AIMIM president Asaduddin Owaisi are among the other prominent candidates. Click here for the list of top candidates.

Who are top candidates in Phase 2 Lok Sabha elections 2019?

Who are top candidates in Phase 3 Lok Sabha elections 2019?

Who are the top candidates in Phase 4 Lok Sabha Election 2019?

Who are the top candidates in Phase 5 Lok Sabha Election 2019?

Who are the top candidates in Phase 6 Lok Sabha Election 2019?

Who are the top candidates in Phase 7 Lok Sabha Election 2019?