Lok Sabha Election 2019: How To Check Your Name On Voter List

The Lok Sabha Election 2019 is drawingto an end and it's time you check your name in the Voter List and be vote-ready. By checking your name in the Voter List, you will ensure that all your details are up to date. You will also get to know the centre where you need to vote. You can also change your assembly constituency or apply for corrections in advance by filling up a few forms. Overseas voters can also apply register online by filling up a form. The national election are being held in seven rounds from April 11 and the results will be announced on May 23. Voting took place across India on April 11, April 18, April 23, April 29, May 6, May 12 and May 19. Elections were also held in four states -- Andhra Pradesh, Sikkim, Arunachal Pradesh and Odisha - along with the parliamentary polls. Andhra Pradesh assembly elections took place on April 11, Sikkim Assembly elections and Arunachal Pradesh assembly elections also took place on April 11. Odisha assembly elections is taking place in four phases on April 11, April 11, 18, 23 and 29. To know how to vote in India, click here.

Around 90 crore people are eligible to vote this time, the Election Commission has said. The number is an increase of about 9 crore compared to last time. It is estimated that about 13 crore voters this time will be first-time voters. The actual number of people who do vote, however, is far less. Even though 2014 saw the highest turnout ever in independent India's history at 66.4 per cent, it meant a huge 27.3 crore people did not vote. Two-thirds of Indians are under 35. Advisable to check name in voter list before going to vote.

Holding elections in India, world's seventh largest nation by area and second most populous country is a complex process. Millions of poll workers, police and security personnel are deployed in cities, towns, villages and hamlets. They use planes, boats, trains, helicopters, elephants and camels and travel by foot to reach far flung voters, because every vote counts. Elections in India are nothing less than a "festival of democracy." For all election-related FAQs, click here.

The model code of conduct is already in place. It is a set of guidelines that candidates, and political parties and governments must follow to keep elections fair.

Lok Sabha Election 2019: Here's how you can check your name on the Voter List:

2. You can search your name on Voter List by entering simple details about you - Name, Father or Husband's Name, Age, Date Of Birth, Gender, State, District and Assembly Constituency.

3. Alternatively, you can simply punch in your EPIC number, which is your Electoral Photo ID Card number.    This number is mentioned in bold letters on your voter identity card. Also mention the State and you will be able to check your name, polling station and other details on the page. 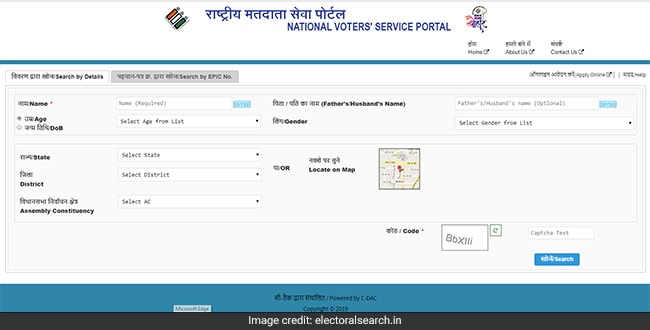 The model code of conduct has already been put in place. About 90 crore voters would be eligible to exercise their voting rights, and among them about 1.5 crore are between the ages of 18 and 19 years. 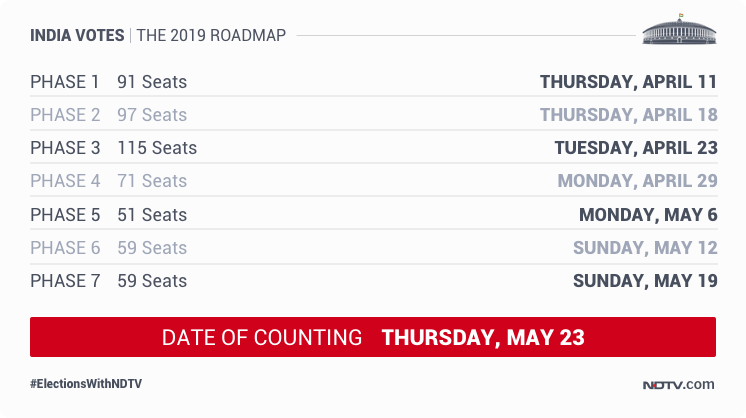 In case you do not find your name in the voter list, you can register by following these steps:

Fill Form 6 that helps 'First time voters' and 'voters who have shifted to another constituency' and submit.

Upload your ID and address proof, and your photograph. Once all the details are filled in, simply scroll down and hit submit.

For offline registration, here's what you need to do:

Procedure of voting for an overseas elector:

An overseas elector is not issued an EPIC and you will be allowed to vote in person at the polling station on production of your original passport. For enrolling, fill Form 6A online at www.nvsp.in and upload the required documents.

How to vote using electronic voting machines or EVMs?

Votes are cast via electronic voting machines (EVM), first trialled in India in 1982. An EVM or Electronic Voting Machine is an electronic device for recording votes. It consists of two units - a control unit and a balloting unit.

Since 2010, the Election Commission has been phasing in a third unit called the VVPAT or the Voter Verifiable Paper Audit Trail, which allows voters to verify that their votes have been recorded correctly by printing a paper receipt. This system will be used with all voting machines in the upcoming assembly and general elections.

This year millions of machines will be deployed -- some taken by camel and helicopter -- to hard-to-reach electorates.

EVMs are battery powered and resemble a briefcase. Despite allegations of hacking, India's Election Commission says there is no proof of tampering in the past.

This year, a receipt will be printed every time a voter casts a ballot, and the slips collected in a sealed box.

Each voter's index finger on the left hand is then marked with an indelible blue ink -- manufactured in a single Indian city in the country's south -- to ensure they don't vote twice. 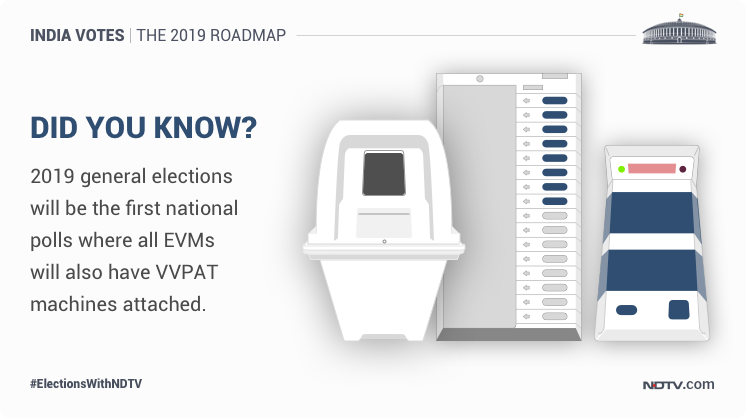 What is NOTA option on EVMs?

NOTA or "None Of The Above" is a voting option on EVMs that allows voters to reject every candidate in their constituency. It was introduced In October 2013 following a Supreme Court order.

In last year's election, Gujarat registered the second highest NOTA votes at 1.8% while Bihar tops the list with 2.48% votes.