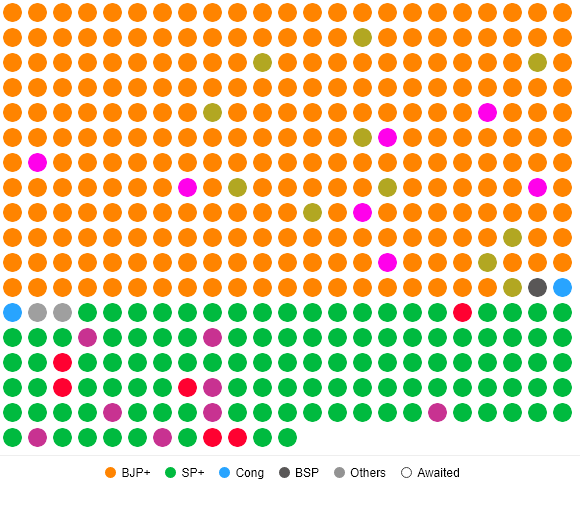 The results for Assembly polls in five states, including the politically significant Uttar Pradesh, will be declared today. Besides Uttar Pradesh, Punjab, Uttarakhand, Goa and Manipur have voted in this round of state polls.

In Uttar Pradesh, the incumbent Yogi Adityanath government is looking to retain power for another term. The ruling BJP faces a stiff challenge from the Akhilesh Yadav-led Samajwadi Party.

The Congress and the Mayawati-led Bahujan Samaj Party are also key contenders in the state poll arena.

Polling across 403 Assembly segments in the country’s largest state was held over seven phases and spanned almost a month – the first phase on February 10 and the last on March 7.

In Punjab, the Congress, riddled by infighting, is up against the Arvind Kejriwal-led Aam Aadmi Party (AAP). The AAP, which won 20 seats in the 2017 election, has gone all out this time in its attempts to score a win.

Other contenders in the poll contest are the Shiromani Akali Dal, which walked out of its alliance with the BJP over the protest against farm laws, and has now tied up with BSP. Former Chief Minister Captain Amarinder Singh, who led the Congress to victory last time and was forced to resign owing to a power tussle within the party, has now joined forces with the BJP. All 117 seats of Punjab voted on February 20.

The election in the 70 seats of Uttarakhand was held on February 14. The polls are being seen as a straight fight between the ruling BJP and the Opposition Congress. However, the AAP too has run an extensive campaign in the state this time and has tried to project itself as an alternative.

In Goa, all 40 seats voted on February 14. In a state where defections and horse-trading have emerged as a key poll issue, several parties, including the Congress and AAP, have moved to safeguard their candidates. The Congress, particularly, is keeping a close watch on the number game this time after it failed to form the government despite winning a majority of seats in the 2017 election. The BJP had then moved swiftly and tied up with regional forces to form the government.

In Manipur, polling on the 60 seats took place in two phases – on February 28 and March 3.

This time, the BJP has gone solo and contested all seats alone. The Congress, on the other hand, has forged an alliance of six political parties and named it Manipur Progressive Secular Alliance.

In the 2017 polls, the Congress emerged as the single largest party with 28 seats. The BJP, however, managed to stitch a coalition with several regional parties to form the government under the leadership of N Biren Singh.

Determined to not be outsmarted this time, the party has rushed a group of senior leaders to explore alliance options if the results throw up a fractured mandate.