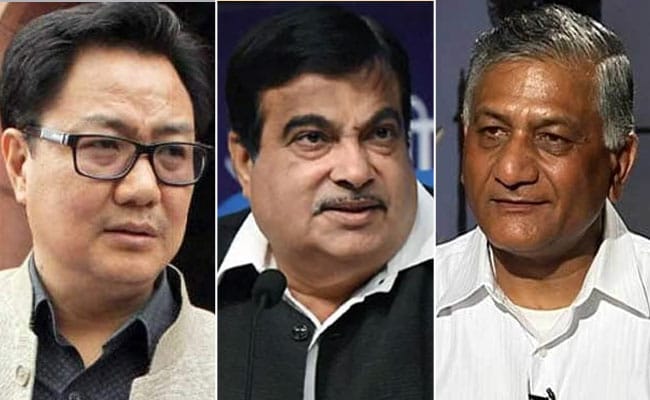 Nitin Gadkari is facing BJP rebel Nana Patole, who has been fielded by the Congress this time.

91 constituencies across 18 states and two Union Territories are voting in the first phase as the general election begins today. Several union ministers including Nitin Gadkari, Kiren Rijiju and VK Singh are among those whose fate will be decided today. Congress's Renuka Chowdary and AIMIM president Asaduddin Owaisi are among the other prominent candidates. Voting for the 543 Lok Sabha seats is being held in seven phases and counting will be done on May 23.

Following are the top heavyweights contesting in the first phase of Lok Sabha polls 2019:

1. Nitin Gadkari - The Union Minister for Road, Transport and Highways is the BJP candidate from Nagpur. Mr Gadkari, who had defeated the Congress's Vilas Muttemwar in the 2014 parliamentary election, is facing BJP rebel Nana Patole, who has been fielded by the Congress this time.

2. Kiren Rijiju - The Union Miinster of State for Home faces a tough battle on his home turf - the Arunachal West constituency. He will go against the Congress's candidate Nabam Tuki, a former chief minister, and the National People's Party's Khyoda Apik.

3. VK Singh - The former army chief and junior minister in the External Affairs Ministry is battling from Ghaziabad in western Uttar Pradesh where the Congress has fielded Dolly Sharma and Suresh Bansal is the Samajwadi Party-Bahujan Samaj Party-Rashtriya Lok Dal alliance candidate.

4. Asaduddin Owaisi - The AIMIM chief is the sitting lawmaker from Hyderabad in Telangana and has held the Lok Sabha constituency since 2004. All 17 seats of Telangana will vote in the first phase of elections today.

5. Renuka Chowdhury - The Congress candidate for Khammam Lok Sabha seat in Andhra Pradesh, Renuka Chowdhury has served as the Union minister of State for Ministry of Women and Child Development and Tourism in the UPA government. She will take on Devaki Vasudeva Rao of the BJP.

6. Mahesh Sharma - The Union Culture Minister is the sitting lawmaker from Gautam Buddh Nagar. He will take on the BSP's Satveer Nagar and the Congress' Arvind Singh along with 10 other candidates.

7. Ajit Singh - The 80-year-old leader of the Rashtriya Lok Dal is the candidate of the Samajwadi Party-BSP-RLD alliance in Uttar Pradesh from Muzaffarnagar. He will take on former Union minister Sanjiv Balyan of the BJP in this crucial western UP constituency.

10. Gaurav Gogoi - The son of former Assam Chief Minister Tarun Gogoi, Gaurav Gogoi is the sitting lawmaker from Kaliabor in the state. The Congress leader will take on Moni Madhab Mahanta from the Asom Gana Parishad.