Lok Sabha elections 2019: Sunny Deol is likely to be the BJP candidate from Gurdaspur in Punjab

Actor Sunny Deol, known for the all-time favourite "Dhai Kilo ka Haath" line from a 1990s film, joined the ruling BJP today, days after he met with party president Amit Shah. He has been declared the BJP candidate from Gurdaspur in Punjab. "Like my father joined Atal Bihari Vajpayee, I have decided to join Prime Minister Narendra Modi. I want PM Modi for the next five years," said the actor in a short speech, flanked by two union ministers at the BJP office in Delhi.

Welcoming him to the party, Defence Minister Nirmala Sitharaman referred to his blockbuster 1997 movie "Border" based on an episode from the India-Pakistan of 1971. "Sunny Deol made the film Border which showed how the feeling of nationalism and patriotism when portrayed beautifully on film can touch a cord with the people," Ms Sitharaman said, linking the brand new BJP recruit to the party's top election pitch of national security and its strong stand against terror from Pakistan.

"It cannot be acting when it comes from the heart," added Union Minister Piyush Goyal. 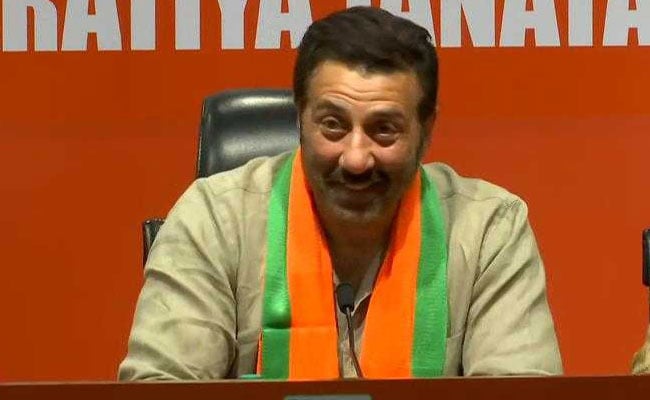 Actor Sunny Deol, on joining the BJP, said, "I want PM Modi for the next five years"

After his meeting with Amit Shah last week, Sunny Deol had been non-committal. "I heard about the rumours that I am joining politics. I just met him (Amit Shah) and we took a photograph, that's it," he had said.

As he joined the BJP today, Twitter had a field day with memes circling around his most popular dialogues, including this gem from the movie "Damini": "Yeh dhai kilo ka haath jab kisipe padtha hai na, toh aadmi ut-tha nahi uthh jaata hai."

The BJP, which has an alliance with the Shiromani Akali Dal in Punjab, is fighting three of the 13 parliamentary seats in Punjab: Amritsar, Gurdaspur and Hoshiarpur.

Gurdaspur was the constituency of veteran actor Vinod Khanna, who died in 2017. There was a buzz for some time that the BJP may field his wife Kavita Khanna or son Akshaye Khanna from there.

Sunny Deol, 62, debuted in films with the movie "Betaab" in 1983. Over the years, he excelled in action hero roles in films like "Ghayal", "Gadar: Ek Prem Katha", "Damini" and "Border".

Dharmendra had a brief stint in politics about 10 years ago, when he contested the 2004 national election from Rajasthan's Bikaner on a BJP ticket and won. Hema Malini, Sunny Deol's stepmother, is fighting for re-election from Uttar Pradesh's Mathura.

Punjab will vote in a single phase, on May 19, the last day of the seven-phased national election. The results of the staggered polls will be announced on May 23.