The candidates whose RRB Group D exams have been scheduled for next 5 days may download their admit cards from the official websites of Railway Recruitment Board. RRB Admit Card 2018: The candidates whose RRB Group D exams have been scheduled for next 5 days may download their admit cards from the official websites of Railway Recruitment Board. RRBs or Railway Recruitment Boards, the official hiring agency of Indian Railways, is currently engaged in one of the largest employment drive for the recruitment of points man, helper, gateman, track maintainer and porter positions from the beginning of this year, for which the recruitment exam started on September 17, 2018. In another development recently, the RRBs have released the results of RRB ALP and Technician stage 1 CBT or Computer Based Test results. The results are available on the official RRB websites.

Overall, 1.89 crore candidates are to sit for the Group D CBT which will conclude on December 17.

The recruitment exam is being held for 62907 vacancies of Level- 1 posts.

RRB Group D Exam 2018: Prepare For Your Exam Based On These Subject Areas

The results of RRB Group D exams will be released after the completion of the whole stage 1 CBT process. 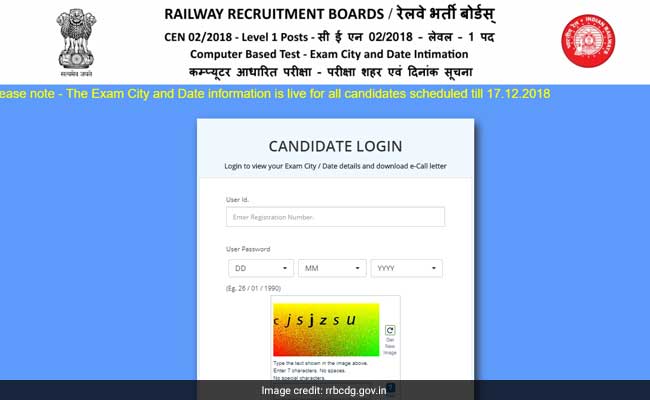 The candidates who are appearing for RRB Group D exam will need their user ID (registration number) and user password (date of birth) for the admit card download.

Click on the respective link of the RRBs you have applied to for RRB Group D exam admit card 2018 download:

The RRB Group D exam is being held at over 400 centers across the country and till October last over 1 Crore aspirants have appeared for the Level 1 post examination which began on September 17, 2018.

An estimated 3 to 4 lakh candidates are appearing for the examination every day and the average attendance in the exam is 60%.

The exam is being completed within 51 days of commencement.