BJP MP Pragya Thakur has been nominated to a 21-member parliamentary consultative committee on defence that will be headed by Defence Minister Rajnath Singh. An accused in the 2008 Malegaon blasts case, Pragya Thakur is currently out on bail, granted on grounds of ill health, and faces multiple charges under sections of the Unlawful Activities Prevention Act, the Indian Penal Code, the Arms Act and the Explosive Substances Act. In its response the Congress called the appointment "an insult to our nation's defence forces".

"Pragya Thakur, a terror accused & Godse fanatic has been nominated by the BJP govt. to be a member of the Parliamentary Panel on Defence. This move is an insult to our nation's defence forces, to our nation's esteemed parliamentarians & to every Indian," the party said in a tweet this morning.

Congress Secretary Pranav Jha told news agency IANS that her appointment was "not good for democracy" and urged the BJP to re-think the nomination.

"Bringing such people, against whom the cases are going in court is not good for democracy. Everything is not guided by the Constitution but some decisions are taken on moral grounds too," he said.

The consultative committee is decided by the Ministry of Parliamentary Affairs and not by parliament itself; it only has powers of consultation and its recommendations are not binding.

According to a notification dated October 31, other members of the committee include National Conference leader Farooq Abdullah, who has been detained at his residence in Jammu and Kashmir's Srinagar since the centre's decision on Article 370 in August. His absence from the start of parliament's Winter Session, which began on Monday, led to protests from opposition leaders.

In July the newest-member of the consultative committee on defence was admonished by the BJP for telling party workers that she "wasn't elected to get drains and toilets cleaned". 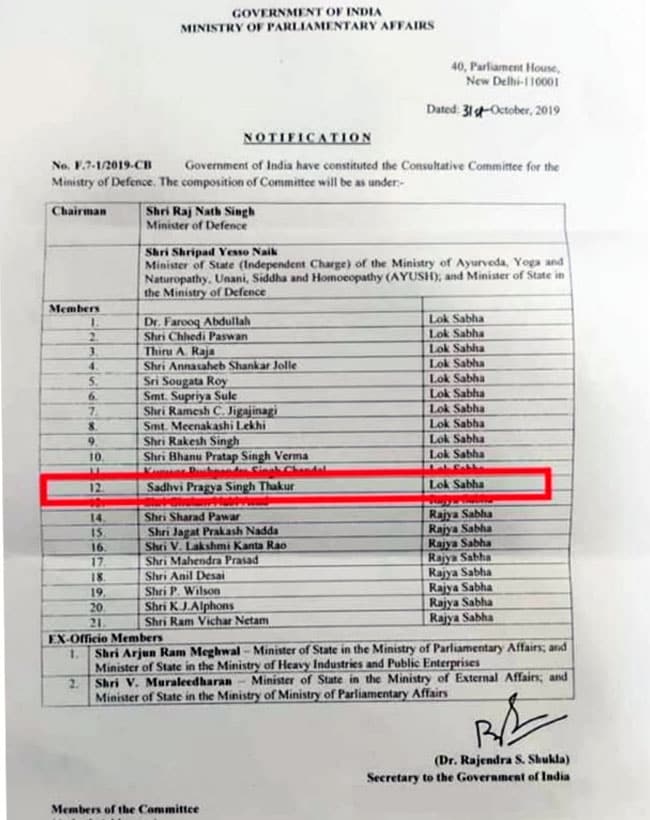 The consultative committee is decided by the Ministry of Parliamentary Affairs

The 49-year-old was reportedly responding to a BJP worker complaining about the lack of hygiene and cleanliness in his area.

Only a few months earlier, while campaigning ahead of the Lok Sabha polls, Pragya Thakur sparked fury from the opposition after describing Nathuram Godse, Mahatma Gandhi's assassin, as a "patriot".

The remark eventually, forced the BJP into damage control mode with party leader Amit Shah tweeting: "these comments have nothing to do with the party".

Amid spiraling criticism and unrelenting attacks by opposition leaders, Prime Minister Narendra Modi was forced to issue a comment as well. He said he could "never forgive her".

"These kinds of statements made about Gandhiji are condemnable and cannot be allowed in civilised society. She may have apologised, but I shall never forgive her," the Prime Minister said.

However, she was let off lightly by the party after she made an apology by way of a statement that said: "The remarks I made have hurt the sentiment of many...".

At least six people were killed and more than 100 injured after a bomb strapped to a motorcycle exploded on September 29 in Maharashtra's Malegaon. An NIA court had dropped charges under the Maharashtra Control of Organised Crime Act but a trial court retained those under the Unlawful Activities (Prevention) Act.