Bigg Boss 14: From Rubina Dilaik's Confession To Rahul Vaidya's Proposal, Here Are The Highlights Of The Season

Bigg Boss 14 finale: Here are some of the major highlights from the season 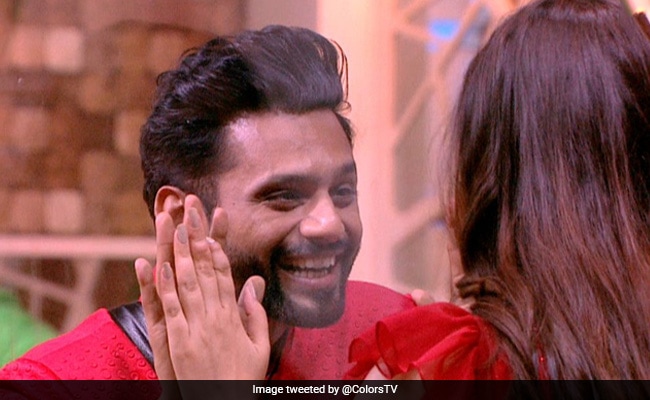 Rahul Vaidya in a still from Bigg Boss 14. (courtesy ColorsTV)

Ahead of the Bigg Boss 14 finale, we decided to give the fans of the show a dose of entertainment by looking back at the biggest moments of this season. The grand finale, which is set to take place tonight, will witness Rubina Dilaik, Rahul Vaidya, Aly Goni, Nikki Tamboli and Rakhi Sawant competing for the winner's trophy. From Rahul Vaidya's proposal on national television, to Vikas Gupta and Arshi Khan's infamous fight, the list has it all. Not to mention Rubina Dilaik's confession about her and husband Abhinav Shukla's relationship, and the moment when the show host Salman Khan broke down after Jasmin Bhasin's eviction. Here are some of the major highlights from the show:

When Rubina Revealed She And Abhinav Were About To Get Divorced

During mid-season of Bigg Boss 14, TV star Rubina Dilaik revealed that she and her husband Abhinav Shukla were about to get divorced and that the couple would have filed for it by November if they hadn't entered the Bigg Boss house. "Humne ek dusre ko November tak ka time diya tha. We were about to get divorced. Agar yaha dono saath nahi aate, toh shayad sath bhi na reh paate (We had given each other time till November. We were about to get divorced. If we hadn't come here we would not have been together)," she said. However, the couple later resolved their differences and Rubina Dilaik and Abhinav Shukla were often seen standing by each other during the course of the tasks and otherwise in the show. Abhinav Shukla schooled signer and fellow contestant Rahul Vaidya several times for "disrespecting" his wife.

When Rahul Vaidya Proposed To Disha Parmar And She Said "Yes"

The singer proposed to actress Disha Parmar on her 26th birthday last year. Rahul was seen sporting a white t-shirt with "Marry Me?" written on it. Calling her the "most beautiful girl" he has ever met, Rahul proposed to her. The singer said that he has never been more "nervous" and added that he doesn't know what took him so long to ask. Rahul said that he will be waiting for Disha's answer. A few months later, on Valentine's Day, Bigg Boss sent the actress in the house. An excited Rahul Vaidya asked her once again if she would marry him and she said yes, with a placard in her hands and a smile on her face.

Vikas Gupta and Arshi Khan were both wild card contestants, who had also featured in Bigg Boss 11. During this season, Arshi Khan was frequently seen provoking Vikas Gupta, to which he never really reacted. Vikas, who chose to stay quiet to Arshi's provocation for the longest time, lost his temper when she dragged his family and personal matters in the game. An angry Vikas pushed her into the swimming pool. He also apologised for his move. Bigg Boss announced that Vikas Gupta will no longer be a part of the game, given the fact that the show's rules do not allow any housemate to use any form of physical force or indulge in any sort of violent behavior. Bigg Boss also called out Arshi Khan for her behavior.

When Salman Khan Broke Down On Weekend Ka Vaar

Naagin actress Jasmin Bhasin, who was one of the most-loved contestants during the initial stages of the TV reality show, was evicted from the house way before the finale, which came as a shock to most of the contestants, including her best friend Aly Goni. After Jasmin Bhasin's eviction, all housemates were in tears. The show's host Salman Khan too got teary after he announced her eviction from the show. This was the first and the only time that Salman Khan broke down during the season.

When Sara Gurpal Was Voted Out By The 'Seniors'

This year's contestants began the season with a little help from former Bigg Boss contestants Siddharth Shukla (winner of season 13), Hina Khan (season 11 finalist) and Gauahar Khan (who won season 7) - to pick a contestant from the nominated inmates for eviction. After much deliberation, they zeroed in on Sara Gurpal, who then broke into tears. After Sara Gurpal's exit from the house, a section of the Internet was furious and demanded that the singer should we brought back in the show and that she should be given a second chance.

TV star Eijaz Khan and actress Pavitra Punia, who were not very cordial when they started out the season, found a friend in each other after staying together in the red zone of the house for a while. After her eviction from the house, Pavitra arrived in the house to meet Eijaz, who she lovingly referred to as "Khan Sahab." Eijaz, expressing his feelings for her said, "Teri baat karne ke liye tarasta hu main, kisi se bhi. Main apni zindagi tere saath share karne ke liye tayar hu. Tu jaisi hai, zindagi main jahan bhi hain, mujhe qubool hai." When he asked the actress if she loves him, Pavitra Punia said: "Yes, a lot." The duo are frequently spotted together outside the house.

Some other big moments that took place in the Bigg Boss 14 house this season were when Rahul Vaidya walked out from the house and was given a chance to re-enter. Another one was when Salman Khan schooled Rakhi Sawant on her unacceptable conduct and warned her to improve her behavior or else she would have been ousted from the house. Rubina Dilaik trended several times, courtesy her fight with Jasmin Bhasin, who was once her friend. She also became the center of attention when she questioned the show's host Salman Khan, and when she threw water on Rakhi Sawant when the latter questioned Abhinav Shukla's character. Abhinav Shukla and Aly Goni's war of words and Jasmin Bhasin and Rahul Vaidya's fights during the tasks, kept them in the trends list too.

Which was your favourite moment in the Bigg Boss 14 house? Let us know using the comments section below.