"Sometimes you just have to roll with these punches," wrote Jasmin Bhasin 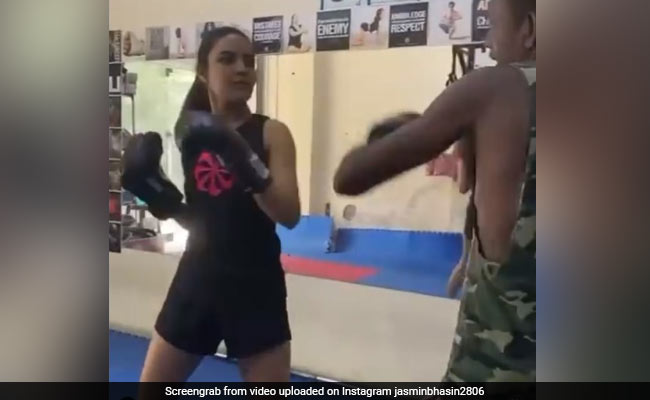 Jasmin Bhasin in a still from the video. (courtesy jasminbhasin2806)

TV star Jasmin Bhasin found the perfect way to channel her aggression in the most productive way possible. The Naagin 4 actress is busy with boxing sessions these days. Jasmin, who got evicted from Bigg Boss 14 after staying in the house for almost 100 days, shared a video from one of her boxing sessions along with her trainer. She simply wrote in her caption: "Sometimes you just have to roll with these punches." Jasmin's Instafam was amused to see the video and wrote comments like "you go girl." Another comment read, "Get in there! All that release! Thinking of those who did you wrong whilst doing that! Go girl! Team JA."

After Jasmin Bhasin's eviction, all housemates were in tears. The show's host Salman Khan too got teary after he announced her eviction from the show. After her exit from the show, Jasmin shared a statement that read, "To all you beautiful people, who have stood by me through thick and thin, during this rollercoaster ride of Bigg Boss, I just wanna tell you, I absolutely love each and every one of you. I was in tears after I saw all the love and support my fans have showered me with, on my good days and even on my bad ones. With over 2 million tweets for #BringJasminBhasinBack you guys proved your strength. I am shocked but so grateful at the same time."

Jasmin Bhasin, a popular name in the Indian television industry, has been a part of reality shows like Bigg Boss 14 and Khatron Ke Khiladi 9. She is best-known for starring in TV shows Tashan-e-Ishq, Dil Se Dil Tak, Dil Toh Happy Hai Ji among others. She briefly starred in Naagin 4.

Just A Pic Of Salman Khan In His Antim: The Final Truth Look