Amitabh Bachchan made the best use of Throwback Thursday 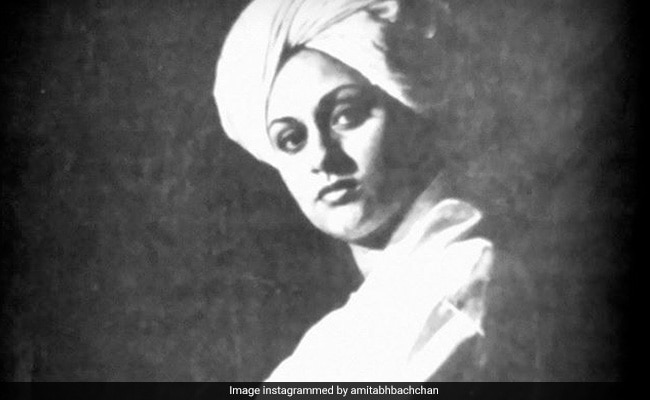 Amitabh Bachchan, on Thursday, shared a throwback picture of his actress-wife Jaya Bachchan, on his Instagram profile and took us back in time. The veteran actor, who is quite active on social media and keeps his fans amused with his humour-infused posts, gave us a glimpse of the actress' look from a Bengali movie Dagtar Babu which didn't get released. In the monochrome picture, Jaya Bachchan can be seen dressed as Swami Vivekananda while posing for the camera. Sharing the picture, 77-year-old actor wrote, "Jaya, in film Dagtar Babu in Bengali playing Vivekananda. Film could not be completed."

Jaya .. in film 'Dagtar Babu' in Bengali playing Vivekanand .. film could not be completed

A few weeks ago, Big B shared a BTS shot from an advert shoot on Twitter, featuring Jaya Bachchan. Besides Big B and Jaya Bachchan, the advertisement also featured Katrina Kaif. In the picture, he can be seen posing with Jaya Bachchan, Katrina Kaif, south actresses Manju Warrier, Regina Cassandra, Reba Monica John and Nidhi Agerwal. Sharing the picture, he wrote, "And with the ladies today at work. All of them exceptional celebrity stars in their own right. In their own environment. Another honourable day. Sad it, the scheduled work, has come to an end. But then tomorrow is another day."

T 3420 - .. and with the ladies today at work .. all of them exceptional celebrity stars in their own right .. in their own environ .. another honourable day .. sad it, the scheduled work, has come to an end .. but then tomorrow is another DAY ! pic.twitter.com/dA8H6lotT0

Big B and Jaya Bachchan got married in 1973 after the release of the movie Zanjeer in which they starred together. They are parents to Abhishek Bachchan and Shweta Bachchan Nanda.

On the work front, Amitabh Bachchan will next be seen in Shoojit Sircar's Gulabo Sitabo, Rumi Jaffery's Chehre and Ayan Mukerji's Brahmastra, in which he will share screen space with Nagarjuna, Ranbir Kapoor and Alia Bhatt. Brahmastra is slated to release on December 4.