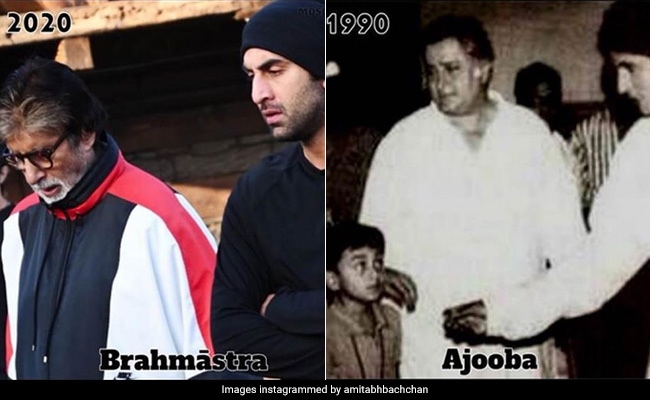 Amitabh Bachchan has again treated us to a picture collage of himself featuring his Brahmastra co-star Ranbir Kapoor on Thursday and we absolutely love it. The cine icon delighted us with a collage of pint-sized Ranbir Kapoor from the sets of the 1991 film Ajooba. The film, which was directed by Ranbir's granduncle Shashi Kapoor, featured Ranbir's father Rishi Kapoor and Amitabh Bachchan in the main roles. In the picture, Big B can be seen greeting little Ranbir as he stands beside his granduncle Shashi Kapoor. The collage also featured a photograph of Ranbir and Big B from the sets of upcoming film Brahmastra. Sharing the picture on Instagram, Amitabh Bachchan wrote: "Then and now. The wide eyed Ranbir on sets of Ajooba with Shashi ji and me...And the dominant Ranbir today on sets of Brahmastra with moi...1990 to 2020! Phew! Been a while."

Amitabh Bachchan has previously worked with the Kapoors in several films. The cine icon starred alongside Shashi Kapoor in various films including 1979 film Kaala Patthar, 1978's Trishul, 1979's Suhaag and 1975's Deewar among others. He has also co-starred with Rishi Kapoor in several films like 1983's Coolie, 1981's Naseeb, 1977's Amar Akbar Anthony and many more. Ranbir Kapoor's mother Neetu Singh featured alongside the versatile actor in 1976's Adalat, 1977's Parvarish, 1978's Kasme Vaade, 1979's The Great Gambler and a few others.

Sharing pictures from the sets of Brahmastra featuring Ranbir Kapoor, Amitabh Bachchan praised the actor in his previous post and wrote: "At work with one of my favourites, Ranbir...I need four (chairs) to keep up with his enormous talent."

Directed by Ayan Mukerji, Brahmastra  also stars Alia Bhatt alongside Ranbir Kapoor and Amitabh Bachchan. The film features Mouni Roy, Dimple Kapadia and Akkineni Nagarjuna as well. Brahmastra is a fantasy trilogy. Produced by Karan Johar's Dharma Productions, the first part of the film is scheduled to release on December 4.

Besides Brahmastra, Amitabh Bachchan will also feature in Chehre, Jhund and Gulabo Sitabo.