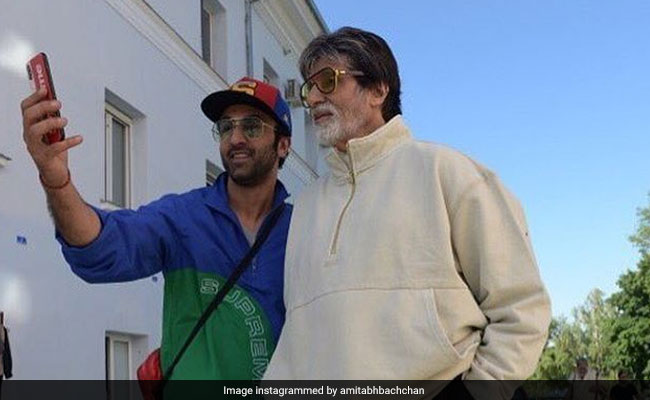 Amitabh Bachchan and Ranbir Kapoor, who are co-stars of Ayan Mukerji's upcoming fantasy trilogy Brahmastra, seem to be bonding over quite well and the megastar's latest Instagram post is proof. In a recent post, the 76-year-old actor thanked Ranbir for giving him "the elixir of life". "Thank you Ranbir Kapoor for giving me the elixir of life. Still buzzing buddy Ranbir Kapoor," Big B captioned a picture which features himself with his Brahmastra co-star. Though we aren't quite sure about the "elixir" which Amitabh Bachchan is talking about in his post but it appears that it has worked wonders for him. Amitabh Bachchan had previously shared the same photo when he was shooting for a Brahmastra schedule in New York last year. The photo has close to three lakh likes in less than six hours.

Directed by Ayan Mukerji and produced by Karan Johar's Dharma Productions, the film also stars Alia Bhatt, Mouni Roy, Dimple Kapadia and Akkineni Nagarjuna. The first part of Brahmastra is scheduled to hit the screens this year on Christmas. "We are very excited for the film. It is a step ahead. This will take cinema to another level. I am excited for next year," Alia earlier told news agency PTI. Amitabh Bachchan will be sharing the screen space for the first time with actors Ranbir Kapoor and Alia Bhatt.

Since Amitabh Bachchan started shooting for Brahmastra in June last year, the actor has been sharing continual updates on social media. Remember the picture he shared with his Brahmastra co-stars and filmmaker Ayan Mukerji before he commenced shooting for the film?

We prep for BRAHMASTRA .. RANBIR , Alia , Ayan .. all except moi .. I seem to having an outer space experience ..