Brahmastra Diaries: The One Where Amitabh Bachchan Wore His 'Traditional Welcome' 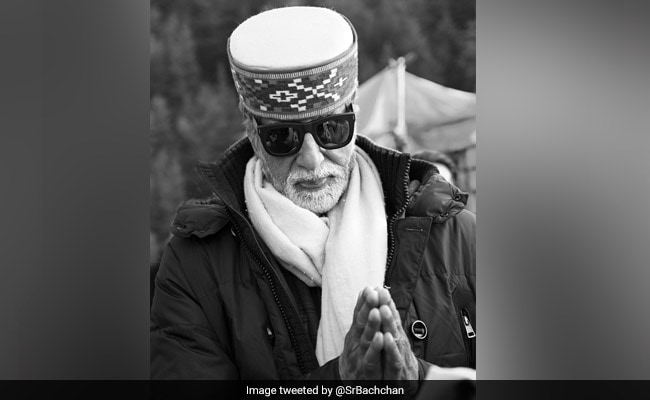 Amitabh Bachchan might be busy shooting in the cold temperatures of Manali (-3 degrees, like he revealed in his previous tweet) but he did find his share of warmth in the city and its people, and his latest tweet is all about that. On Wednesday, the 77-year-old actor shared a picture from his Manali diaries, where he is currently shooting for his forthcoming film Brahmastra. In the picture, Big B can be seen dressed in a traditional Himachali topi and a muffler. Big B can also be seen wearing a pair of sunglasses in the greyscale picture.

Big B accompanied the photograph along with a caption that read, "To the warm, loving and ever smiling well-wishers from Himachal Pradesh, and in particular from where we work - Manali. Thank you for all the love and generous care. Wearing their traditional welcome."

T 3569 - To the warm loving and ever smiling well wishers from Himachal Pradesh, and in particular from where we work - Manali .. thank you for all the love and generous care !
Wearing their traditional welcome .. pic.twitter.com/b3WVDXW0eB

Earlier this week, Amitabh Bachchan shared a picture from the sets of Brahmastra along with his co-star Ranbir Kapoor. He captioned the post: "Minus degrees ... Err like -3. Protective gear and the work etiquette." ICYMI, this is the post that we are referring to:

Brahmastra is a fantasy trilogy, directed by Ayan Mukerji that also features Alia Bhatt and Ranbir Kapoor. The film's impressive star cast also includes Mouni Roy, Dimple Kapadia and Akkineni Nagarjuna. Shah Rukh Khan will reportedly make a guest appearance in the film. The first part of the film is expected to release next year. The film has been produced by Karan Johar's Dharma Productions.