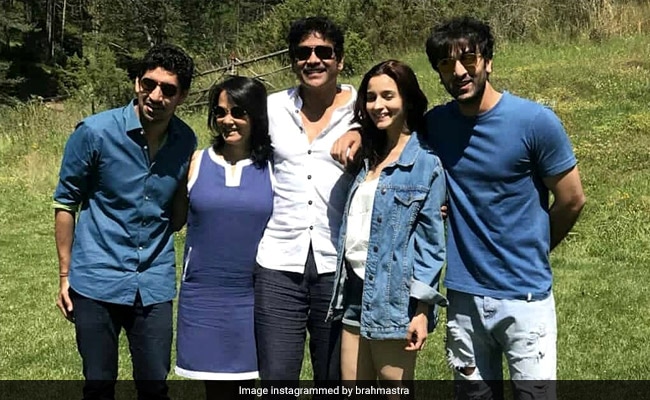 Nagarjuna with the team of Brahmastra (courtesy brahmastra)

Ayan Mukerji's epic fantasy film Brahmastrais getting more and more interesting with each passing day. The director once told us fire is "the centre of Shiva's power in Brahmastra" but little have been divulged about south superstar Nagarjuna's role in the film. Now, a Mumbai Mirror report stated that Nagarjuna reportedly plays the role of an archaeologist in the film and has already shot his portions at Kashi Vishwanath Temple, the Chet Singh Fort and at locations across the ghats of Varanasi already. "Nagarjuna's character, along with his students, undertakes an expedition to restore an ancient temple along the banks of the Ganga," Mumbai Mirror quoted a source as saying, and that's when Nagarjuna's character meets Ranbir Kapoor's Shiva.

Interesting to note here that Kashi Vishwanath Temple is one of the most famous temples dedicated to Lord Shiva and Shiva is the name of Ranbir Kapoor's character in Brahmastra. Mumbai Mirror also added that Ranbir's Shiva is "a guy next door, who can emit fire from his hands" while Alia Bhatt plays Isha, Shiva's love interest. "An important event leads Shiva and Isha to Nagarjuna. The story unfolds in the ancient temple city before moving to the Himalayas," the publication added the source as saying.

Actors Mouni Roy and Saurav Gurjar are the antagonists in the film and Mumbai Mirror reported that: "The adventure kicks off after all of them come face-to-face in Varanasi. A high-octane action sequence featuring them was shot earlier in the year." The cast of Brahmastra were spotted filming at locations across Varanasi in June this year. Take a look below:

Earlier, Ayan Mukerji had written a lengthy post about how he created special moves for Ranbir Kapoor's character in Brahmastra, writing: "How do we create the moves for Shiva's connection with fire? Fire being the center of Shiva's power in Brahmastra... A power that comes from ancient Indians, from a deeply spiritual place, from within."

Ido Portal. As we started on this movie, the first big question to answer was : How do we create the moves for Shiva's connection with Fire? Fire being the centre of Shiva's power in Brahmastra... a power that comes from ancient Indians, from a deeply spiritual place, from within. I had no reference point for what I had written... No comic books, or existing story on which this was based... but for Shiva's movements, we needed something that worked amazingly as action entertainment, but also had something deeper, something that was created from a very original spiritual place. It was one of the great fortunes for the movie that I found Ido and understood what he did, and that he agreed to work with Ranbir on this. Our time with Ido has taken us from Phuket to Berlin, Mumbai, Tel Aviv and Sofia... The contribution he has made is to be experienced in the movie... but the joy of collaborations like this, filled with growth and learning, is one of the most wonderful things to have happened on this journey... #movementculture #somuchoutthere #brahmastra

Brahmastra also stars Amitabh Bachchan, who reportedly plays Shiva's mentor in the film. Shah Rukh Khan has been roped in for a cameo, which he's already shot for. Directed by Ayan Mukerji, Brahmastra is slated to hit screens in May 2020.