Why Ayushmann Khurrana Picks The Roles He Does. Because, FOMO

"I'd love to work with Rohit Shetty, though it's a completely different zone for me," said Ayushmann 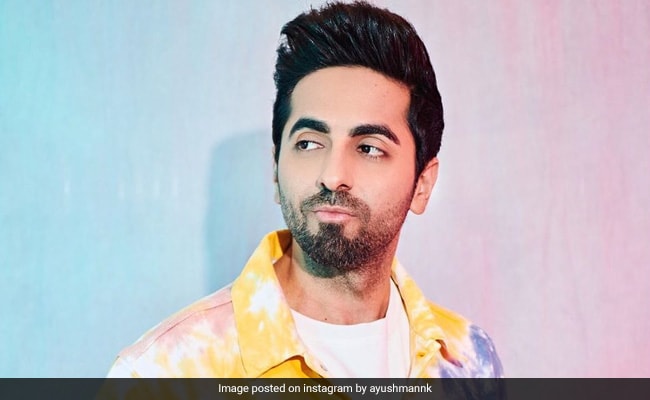 There are all kinds of movies in Ayushmann Khurrana's varied filmography but the National Award-winning actor now hopes to do an out-and-out action thriller in Rohit Shetty style. Ayushmann has made a name for himself with quirky stories set in small town India and in his latest Shubh Mangal Zyada Saavdhan, he plays one of the two men in a relationship. A crowded release calendar notwithstanding, the actor said he will go wherever an interesting script takes him as he does not believe in dos and don'ts. "Engaging people for two hours in a theatre is most important. It could be a vanilla subject but it'll work if the film as a whole works. Right now, I'm looking for an action thriller. I'd love to work with Rohit Shetty, though it's a completely different zone for me," Ayushmann told news agency PTI in an interview.

The actor has been on a golden run that started with 2017's Bareilly Ki Barfi to his last release, Bala but there has not been enough time to pause and process. "I live in the present but my eyes are always on the future. I'm just thinking, 'what's next' and I'm always excited. The kind of subjects I'm getting these days, they're incredible. I've this FOMO (fear of missing out), I want to be the first one to do a particular subject. This fear always makes me reach out for newer subjects," he said.

It is not always that good scripts come one's way, sometimes one has to stick their neck out and seek out movies that matter, said Ayushmann citing the examples of Sriram Raghavan's Andhadhun, for which he won a National Award, and Anubhav Sinha's Article 15.

"There should be no shame in asking for work, for films, even if you are an established actor who wants to work with a filmmaker on a particular subject," said Ayushmann.

The actor's hunger for interesting films also made him "instantly say yes" for his latest film Shubh Mangal Zyada Saavdhan. A follow-up to the actor's 2017 hit Shubh Mangal Savdhaan, the film is one of the few movies that explores same-sex relationships in mainstream Hindi cinema.

Ayushmann looks at the film as an "induction about homosexuality for the masses" and not so much a gay love story. "We aren't delving so much in what's happening between the two (men), it's the reaction of the family when they come to know that their son is gay. But this treatment was important because it's the first step. We can't directly climb on the 10th step because people are still jittery about the subject," he said.

Backed by Aanand L Rai, the film is directed by Hitesh Kewalya. Ayushmann said the tone of the film is intentionally over the top. "People should come for entertainment and leave with a message. If we manage to transform even one homophobic person, it will be a victory for the film," he said and added: "This is just the first step, I'm sure in the future, we will see films which are hardcore gay love stories. This one is a conversation starter."

Representation of homosexuality in Bollywood films has often been criticised for being a caricature, rarely sensitive and mostly played for laughs. The 35-year-old recognises that and said the team was clear they didn't want to make being gay a caricature.

"It was a big no. We have seen stereotypical gay characters on screen, most of them are sidekicks, playing heroine's best friend. In this film, they are the protagonists. My character is confident about his sexuality, who doesn't care what society thinks, while the other character is in the closet and is scared. We have shown both the sides," said Ayushmann. The makers found it tough to cast an actor opposite Ayushmann, until they zeroed in on Jitendra.

Ayushmann said it wasn't because the other actors were reluctant to play a homosexual on screen but because his role was more "heroic."

"I think my lines were more flamboyant. The character has bold dialogues, is the one shouting from the building wearing a Superman cape. My character is more heroic. So probably that could be a reason. Though I feel the other character has a better arc. He is closeted, fights the family and comes out in the open. If I was not seven films old, I would have done the other character," he said. Shubh Mangal Zyada Saavdhan is scheduled to release this Friday.

The actor will next be seen with megastar Amitabh Bachchan in Gulabo Sitabo, which reunites Ayushmann with his Vicky Donor director Shoojit Sircar and writer Juhi Chaturvedi. Ayushmann is aware that there is a fear of burnout with too many films and hopes to take a break post Gulabo Sitabo to recharge. "There's definitely a thought about not wanting to burnout, hence it's important to re-energise yourself, take a break. I think about that and I'm already on a break right now," he said.

"I know I have to promote Gulabo Sitabo in the coming months and that'll be it. It's important to be excited for your craft. If you won't get a break you won't be excited enough," added Ayushmann.

Ayushmann hasn't announced a film after Gulabo Sitabo but the actor said he is reading a few scripts and has almost locked his next. "I will be shooting soon, I know there will be a third film also coming out this year. Three films in a year is fine, I'm in a happy space," he said.