"I knew, this stereotype needed to be shattered and the time to change it, is now," said Ayushmann 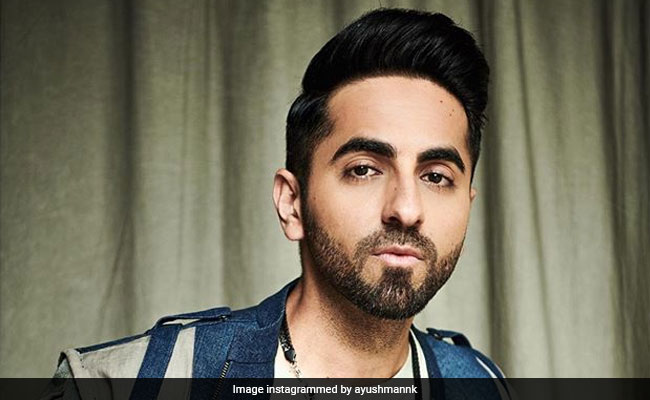 Ayushmann Khurrana, who has quite a reputation for playing challenging roles, recently talked about playing a gay character in his upcoming film Shubh Mangal Zyada Saavdhan and revealed how people from the film industry reacted to it. Ayushmann stated that a lot of people from film fraternity "asked him to re-think" playing a gay man but he went for it because he wanted to change the stereotype. "Doing 'Shubh Mangal Zyada Saavdhan' was one of the most important decisions of my life. A lot of people from the industry asked me to re-think this because no leading hero has ever portrayed a gay man on screen. But I knew, this stereotype needed to be shattered and the time to change it, is now. I somehow knew I had to do it and take the plunge," he was quoted as saying by news agency IANS.

Shubh Mangal Zyada Saavdhan features Jitendra Sharma as Ayushamann Khurrana's gay partner. On Monday, the makers of the film released its first track, which showed Kartik Singh (Ayushmann) and Aman Tripathi (Jitendra) kissing at a wedding. The track perfectly captures the reaction of Aman Tripathi's parents Shankar Tripathi (Gajraj Rao) and Sunaina Tripathi (Neena Gupta) who, like others, find it hard to accept gay couples in their society because of the taboos linked with the LGBTQ community.

Talking about the same, Ayushamann said that apart from raising awareness about taboos linked with LGBTQ community, he wanted to make 'Shubh Mangal Zyada Saavdhan' a full family entertainer: "I have a free pass to do all things different and quirky and I wanted to raise nationwide awareness on the taboos linked with the LGBTQ community at large. I was sure that we have to make 'Shubh Mangal Zyada Saavdhan' as a full family entertainer that brings a smile to people's faces, to spread the message of the film to as many people as possible across the country and I'm thrilled with how the movie has shaped up."

Ayushmann Khurrana's unconventional choice of films and his quirky yet realistic roles have managed to win hearts of his fans so far. From playing a man dealing with premature balding in Bala to portraying the role of a sperm donor in Vicky Donor, Ayushmann has constantly pushed the bar higher by taking up challenging roles. It wouldn't be wrong to say that Ayushmann's fans loved his performance in Dream Girl, in which his character picked a 'dial a friend' job and spoke to people as a woman. Also, his performance as a guy dealing with his mother's pregnancy in Badhaai Ho, in which he worked with Neena Gupta and Gajraj Rao, was unmissable.

Ayushmann gives his family the credit for supporting him throughout his career: "They have constantly been a massive support system for me and they have always enabled me in taking the biggest life decisions. When I decided to pursue a career in showbiz, they stood by me like a rock."

He added that they have told him to "never think of what society will say" about his choice of roles. "When I decided that my brand of cinema will stand for taboo breaking subjects and characters like being a sperm donor in 'Vicky Donor,' a man dealing with erectile dysfunction in 'Shubh Mangal Saavdhan,' someone who is prematurely balding in 'Bala,' to now proudly playing a gay man in 'Shubh Mangal Zyada Saavdhan,' they told me to always back my instincts and never think of what society or my immediate community will say about me," said Ayushmann.

Shubh Mangal Zyada Saavdhan is slated to release on February 21.