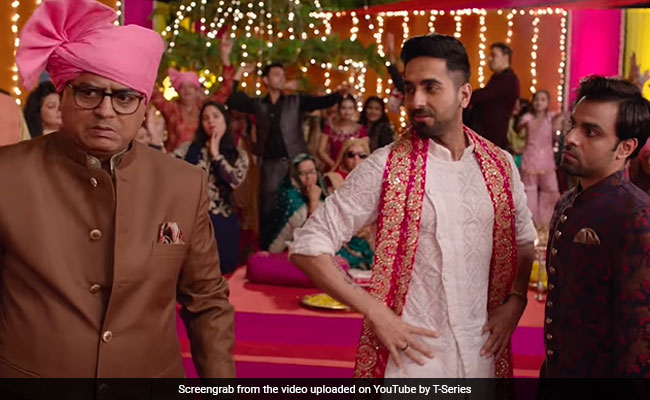 The first track from the upcoming film Shubh Mangal Zyada Saavdhan is out now and it promises a whole lot of fun and drama, of course, in a hilarious way. The track - Gabru - shows Kartik Singh (Ayushmann Khurrana) and his boyfriend Aman Tripathi's (Jitendra Kumar) epic romance at a wedding and Jitendra's father Shankar Tripathi's (Gajraj Rao) numerous attempts to keep the duo away from each other. Why, you ask. Because according to Kartik, Shankar Tripathi is diseased with homophobia. The song is a remix of Honey Singh and J Star's 2013 Punjabi track of the same name and it has been sung by Romy. Tanishk Bagchi has recreated the music of the peppy track and Vayu has written the lyrics for it.

The video starts with Ayushmann Khurrana standing at the entry gate of a wedding and saying, "Bhai log, meri na ek cool si entry plan karo (Brothers, plan a cool entry for me). It should be sexy AF" and entering the wedding by grooving to dhol beats. The next shot shows Jitendra joining his boyfriend Ayushmann at the dance floor even after his father tries his best to keep him away from Ayushmann. Our favourite part of the track is the dance face-off between Ayushmann Khurrana and Gajraj Rao, where the former wins and what makes it more interesting is that it is followed by Jitendra kissing Ayushmann in front of everyone at the wedding, leaving his parents and relatives shocked.

Shubh Mangal Zyada Saavdhan features Ayushmann and Jitendra as a gay couple. The film stars Neena Gupta and Gajraj Rao as Jitendra's parents, who find it hard to accept that their son is gay. The duo have previously worked with Ayushmann in Badhaai Ho. Directed by Hitesh Kewalya , Shubh Mangal Zyada Saavdhan is all set to hit screens on February 21.