Neena Gupta Is In Holiday Mode. Destination Unknown But She Took The Train 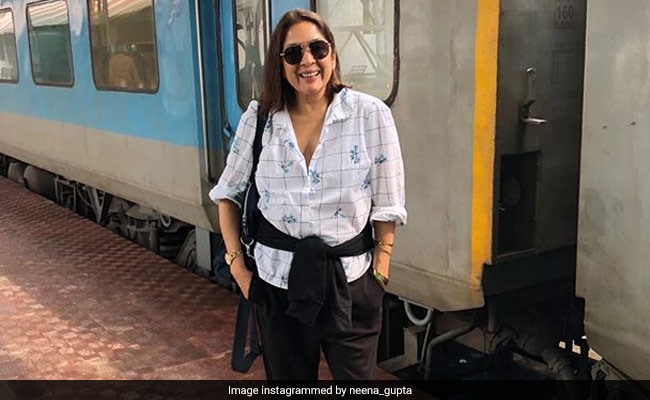 Neena Gupta is in a vacay mode, at least her latest Instagram post says so. The actress on Thursday posted a picture on her Instagram profile where she can be seen posing in front of a train in a railway station. The picture seems to be taken at Kathgodam railway station, as revealed by Neena Gupta on her post. The actress is all smiles in the picture in a floral white shirt and a pair of black trousers. The Badhaai Ho actress captioned the picture: "Train means chutti pe ja rahe hein. Kathgodam." Have a look at the aforementioned post here :

Jitendra Kumar, who has starred as Neena Gupta's son in their latest release Shubh Mangal Zyada Saavdhan commented on the actress' post saying, "Favourite train. Shatabdi", to which the actress replied "Yes".

Few days ago, Neena Gupta posted a throwback picture on her Instagram profile and took us for a trip down the memory lane. She shared the 25-year-old picture and captioned it, "25 saal pehle bhi baal katne ki himmat ki thi (dared to cut hair even 25 years ago)."

The 60-year-old actress is best-known for her performances in films such as Badhaai Ho, Raat Ke Saudagar, Bhagvad Gita, Veer, Mulk and Panga among others.