Ayushmann Khurrana Says 'Starting Career With A Risk Was His USP'

Ayushmann Khurrana said: "It is not easy to be an outsider and find your feet in Bollywood." 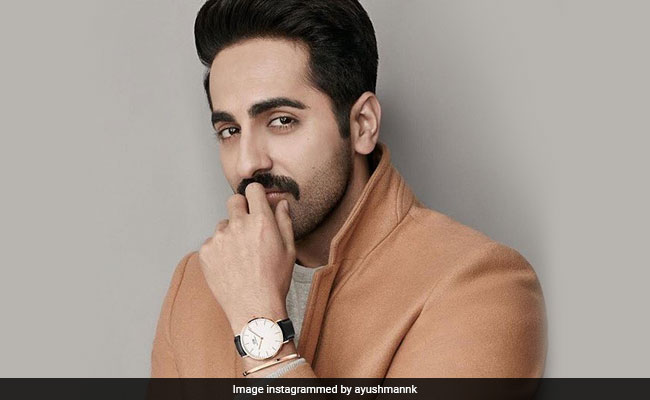 Ayushmann Khurrana says it is not easy for an outsider to find a place in Bollywood. The actor is glad that he got the right kind of support from the filmmakers, and has acknowledged that it pushes him to "deliver every single time". "It is not easy to be an outsider and find your feet in Bollywood. I feel that as an actor, I have been truly blessed that all my directors believed in me and trusted me with their films," Ayushmann told IANS over an email.

"I find their love and belief truly humbling and it pushes me to deliver every single time I face the camera. Secondly, it is the right kind of scripts that you choose, I've always believed that content is the king. There is a certain self-belief, an affirmation that my choices are working," added the actor, who has been roped in as the brand ambassador of globally renowned watch brand Daniel Wellington.

The actor continued: "Most of my films, right from Vicky Donor to Badhaai Ho or my upcoming movies Article 15, Dream Girl and Bala, have different subject lines and have unique concepts attached to them."

After his stint on the small screen, Ayushmann entered the industry in the role of a sperm donor in 2012 with Vicky Donor. He faced the failures of Nautanki Saala!, Hawaizaada and Bewakoofiyaan. But he returned with a bang withDum Laga Ke Haisha as a school dropout, who hesitantly marries an educated but overweight girl.

Ayushmann says he started his career as a risk-taker - and that has been his USP.

Sriram Raghavan loves to shoot me! See you in theatres on 5th October. #AndhaDhun

"Being an outsider, the first film was most important and the film confirmed by belief that novel subjects will always work. Seven years later I reiterate that content which is different will still have more takers than the conventional stuff. With four back-to-back hits as an artiste, it feels great that your choices are validated and you are acknowledged for your persistence and uniqueness," he said.

But that comes with a different kind of responsibility.

"And pressure for box office numbers... I think it's not going to be easy but I'll keep it simple and keep choosing great content," Ayushmann said.

The actor, who has wowed the audience with his singing skills as well, feels it is time to ditch the conventional route to entertain the audience.

"Doing the unconventional thing is least risky now. Conventional has become riskier in this day and age. You have to do something different so that people buy movie tickets and come to cinema halls. The audience has changed. Not only do I experiment with my film choices, I also experiment with my style - sometimes I love going classic and sometimes love it casual; I like to add one quirky element in the ensemble and my look is never complete without a watch and Daniel Wellington has a nice collection of watches to choose from."

(Except for the headline, this story has not been edited by NDTV staff and is published from a syndicated feed.)
Comments
ayushmann khurranaandhadhun