Bala Teaser: Balding Ayushmann Khurrana Is The Hero Of His Own Dreams Until... 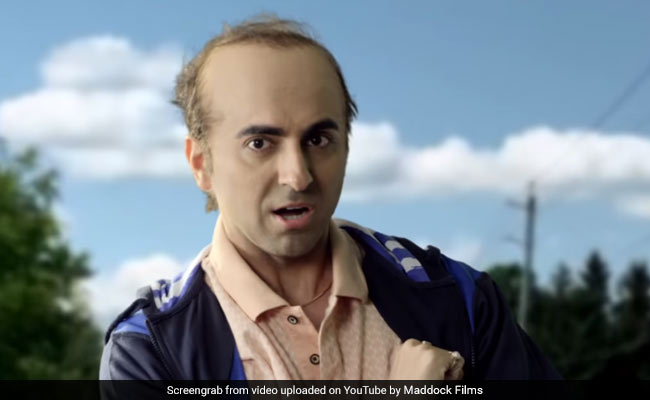 Ayushmann Khurrana in a still from Bala teaser (courtesy YouTube)

Today is a good day because Ayushmann Khurrana's Bala teaser is here. Bala is Ayushmann's new movie and the teaser and logo of the film are proof that it's going to be a cent-per-cent entertaining ride. The teaser of Bala is short and crisp, giving away the main theme of the movie - It is based on a bald protagonist, presumably named Bala, and his struggles with the ahem... hair (read almost no hair) situation. The teaser begins with Ayushmann Khurrana enjoying a bike ride, just like a Bollywood hero, with the song Koi Na Koi Chahiye Pyar Karne Wala from Shah Rukh Khan's 1992 film Deewana.

Ayushmann Khurrana is the hero of his own dreams as he grooves to the tunes and moves to its beats but not for long. As he picks up speed on his bike, the wind does the trick and blows away his cap to reveal his bald patch. Ayushmann Khurrana minus the cap looks like a different person altogether and upon realising his bald patch is out in the open, his expression changes, just like the background song. He now sings Yeh Jo Mohabbat Hai with the previously seen picturesque backdrop now replaced with a desert scene.

Watch the teaser of Ayushmann Khurrana's Bala here. "It's time to make some bold, oops bald moves," he wrote on Instagram.

The teaser may only feature Ayushmann Khurrana but Bala has an ensemble cast - Ayushmann will be seen with his former co-stars Bhumi Pednekar and Yami Gautam along with Jaaved Jaaferi and Saurabh Shukla in the film.

Ayushmann Khurrana, who recently shared the Best Actor National Award honour with Vicky Kaushal, told news agency PTI that his aim as an actor is to focus on experimental roles rather than the 'mainstream hero' concept, another example of which is Bala: "That's what my endeavour is to focus on the common imperfect man who is a hero in life. I have built up my entire career on that. The more challenging or complex the character is, I get more excited. And going with the same trajectory, I'm excited with Bala and also Shubh Mangal Zyaada Saavdhan."

Directed by Amar Kaushik and produced by Dinesh Vijan's Maddock Films (which produced films such as Luka Chuppi, Stree and Hindi Medium), Bala has locked November 22 this year as its release date.