Vicky Kaushal and Ayushmann Khurrana won the Best Actor prize for their work in Uri: The Surgical Strike and AndhaDhun respectively 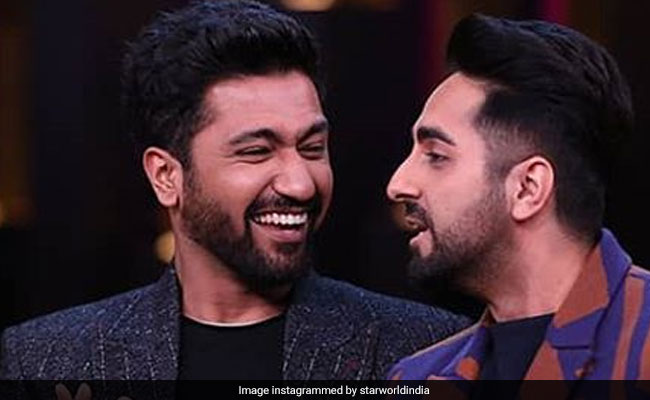 Vicky Kaushal and Ayushmann on the sets of Koffee With Karan. (Image courtesy: starworldindia)

After winning the National Film Awards for the Best Actors, Ayushmann Khurrana and Vicky Kaushal wrote their hearts out by posting extensive notes on social media (but more on that later). This is the story of how both the actors wished each other on their big win. Ayushmann shared a picture along with Vicky on his Instagram story and wrote: "This guy is a gem. As soon as he got to know about his/our victory, he called me and congratulated me. Yaara, I'm so proud of you. Thank you for being so gracious. Lots of love to you." Vicky Kaushal's reaction came with an Andaz Apna Apna reference. The Uri actor quoted a dialogue from Aamir Khan and Salman Khan's 1994 film and wrote: "Do dost ek hi pyaali me chai peeyenge. Isse pyaar badhta hai." 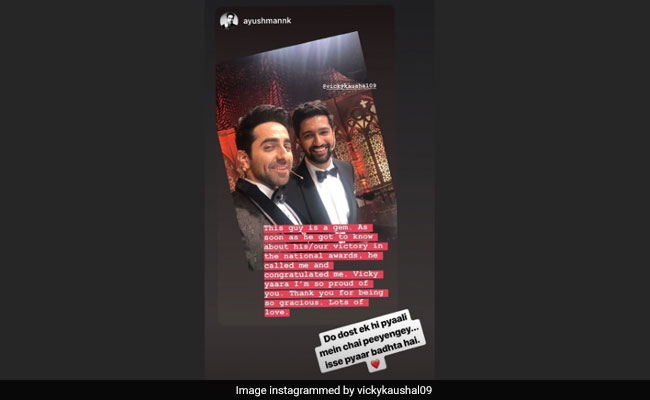 Vicky Kaushal and Ayushmann Khurrana won the Best Actor prize for their work in Uri: The Surgical Strike and AndhaDhun respectively.

Ayushmann, who made his Bollywood debut with Shoojit Sircar's Vicky Donor in 2012, on Sunday, shared a post, in which he recalled the days when he had come to Mumbai and hadn't made it big in the industry. Read Ayushmann's post here:

Vicky Kaushal, who was overwhelmed by his big win, shared a tweet on Friday evening. The 31-year-old actor dedicated his award to the country and the armed forced. Read Vicky Kaushal's post here:

Vicky Kaushal made his Bollywood debut with the 2015 film Masaan. Over a short career span, the actor has delivered hits like Raazi, Sanju and Uri: The Surgical Strike.