Janhvi Kapoor accepted the '#DD2challenge,' for which filmmaker Shashank Khaitan nominated her 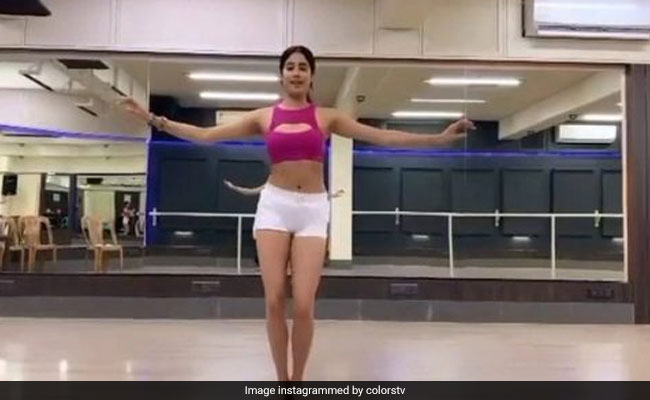 A still of Janhvi Kapoor from the video (Courtesy: colorstv)

Janhvi Kapoor accepted filmmaker Shashank Khaitan's '#DD2challenge' (Dance Deewane challenge) and nailed it with her belly dance moves. Colors TV, which airs dance reality show Dance Deewane, shared a video of theDhadakactress, dancing to the show's theme song. Janhvi sported a pink top and a pair of white shorts in the video. Instagram users were awestruck and left comments such as "superb" and "wow" for the 22-year-old actress. Shashank, who directed Janhvi in Dhadak is one of the three judges on the show. The others judges are actress Madhuri Dixit and choreographer Tushar Kalai.

Actor Ishaan Khatter also took up the challenge and he also danced to the theme song of the show. Ishaan, who trained under choreographer Shiamak Davar for several years, gave a tough competition to the rest of the participants of the challenge. Take a look at the way Ishaan Khatter grooved:

@ishaankhatter just took the #DD2challenge and we can't help but shake a leg with him! Have you taken the challenge yet? Link in bio.

Janhvi Kapoor and Ishaan Khatter co-starred in the aforementioned Dhadak, which released last year. The film is a remake of 2016 Marathi film Sairat. Janhvi and Ishaan are often spotted together and they also often feature on each other's Instagram posts.

On the work front, Janhvi Kapoor will next be seen in the Gunjan Saxena biopic while she has also signed up for RoohiAfza opposite Rajkummar Rao and Karan Johar's Takht. Takht is a period drama and it will also feature Ranveer Singh, Alia Bhatt, Vicky Kaushal, Bhumi Pednekar and Anil Kapoor.