"Upon further editorial review, we found this story did not meet our standards," the editorial note now read 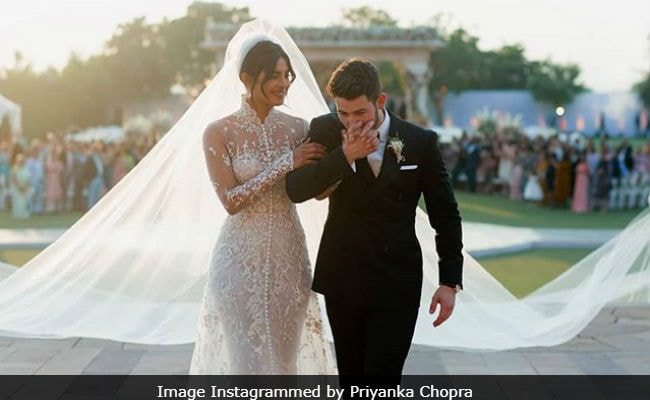 Priyanka Chopra and Nick Jonas have started to irk some with their oversaturated wedding content, but a writer for The Cut took her displeasure to such a bizarre extreme in an article published Tuesday afternoon that intense backlash flooded social media. The website, a part of New York magazine, replaced the article the next morning with an apology.

"Upon further editorial review, we found this story did not meet our standards," the editorial note now reads. "We've removed it and apologise."

In the roughly 1,600-word article titled "Is Priyanka Chopra and Nick Jonas's Love for Real?," writer and comedian Mariah Smith accused Chopra of being a "global scam artist." She wove a theory that Chopra, a Bollywood superstar with 32 million Instagram followers who crossed over into Hollywood with her lead role on ABC's Quantico, is using Jonas, a singer and sometimes actor who rose to fame in the mid-aughts as a member of the Jonas Brothers, for her own gain.

At least, that seemed to be the gist. The article meandered through the couple's history leading up to their wedding ceremonies, which began Saturday after a relatively quick engagement, and criticised Priyanka Chopra's rich-person lifestyle. A few arguments Mariah Smith made:

- Priyanka Chopra responded to Jonas direct-messaging her on Twitter in late 2016 by suggesting he text her instead, and this showcases her "Hollywoodness" because she had the audacity to tell another celebrity "that her 'team' reads her direct messages." Clearly, this was Chopra's way of "indicating that he'd been added to the short list of Hollywood men that she and her team would test out for a possible romance."

- It is ridiculous that Priyanka Chopra, a self-made woman, would want to spend her money on luxury items. This somehow relates to the assertion that her team was once "shopping around for the finer man."

- Nick Jonas has long held that he prefers to date older women, so this relationship makes sense on his end. (He is 10 years younger than Priyanka Chopra, who is 36.) The actress, on the other hand, was previously quiet about her personal life. This makes her suspicious.

- Priyanka Chopra made Jonas enter their wedding ceremony on a horse because she is awful (and not because this is a part of a Hindu wedding procession called the baraat).

The Cut updated the article before taking it down, seemingly to tone down the language. (Smith's "global scam artist" remark, for instance, was removed but remained in a now-deleted tweet.)

Joe Jonas, Nick's also-famous brother and fellow singer, and his fiancee, Sophie Turner, who stars on Game of Thrones, came to the newlyweds' defense with tweets that were sent at the same time. Jonas wrote that the Cut should be "ashamed to have someone write such evil words. What Nick & Pri have is Beautiful Love," while Sophie Turner called the article "wildly inappropriate and totally disgusting."

Among other celebrities who stood by Priyanka Chopra and Nick Jonas was Bollywood actress Sonam Kapoor Ahuja, who tweeted that The Cut has "a lot to answer for."

"The article on @priyankachopra was sexist, racist and disgusting," she continued. "Also it's written by a woman which is so sad. It reeks of envy and bitterness."

Arjun Kapoor, who starred alongside Priyanka Chopra in the 2014 Bollywood film Gunday, tweeted that he knows Priyanka Chopra personally and is "fairly certain @nickjonas hasn't been kidnapped & forced into a union of love."

A number of journalists also spoke out against the piece on Twitter, questioning The Cut's decision to publish it in the first place.

Iva Dixit, an audience editor for the New York Times magazine, agreed that there is "extremely a story to be written" about a wedding that relied so heavily on sponsored content, but that this attempt failed. CityLab writer Tanvi Misra tweeted that she loved "the fawning for Nick Jonas in this through and through bad piece given that billions of Indians collectively gasped, 'this ... guy?!'" When Priyanka Chopra announced her engagement. (Yes, there are many people out there, including this Washington Post reporter's own Indian mother, who had no idea who Nick Jonas was before he became the soon-to-be Mr Priyanka Chopra.)

TV Guide features editor Krutika Mallikarjuna noted that a good portion of the piece "was based on a lack of understanding of Hindu wedding ceremonies and looking at the cultural norms of millions of people as weird and something that needs to be forced on other people." Vanity Fair critic Sonia Saraiya, who questioned whether it was meant to be satirical, also pointed out the cultural insensitivity and suggested Smith "leave aside the 'Indian woman as evil man-eating temptress' and move straight to analysing 'Nick Jonas is a naive virgin who was going to marry me instead.' "

And Louis Peitzman, a deputy arts and entertainment editor at BuzzFeed News, drew attention to another important factor - namely, the editor's role in publishing the story.

Priyanka Chopra and Nick Jonas have yet to respond to the article, and Smith has not returned a request for comment from The Post. (She does seem to have deleted a number of tweets related to the article and Chopra.) A representative of New York magazine directed The Post back to the editor's note.

Writer Bolu Babalola summed up the online conversation surrounding the blog post: "That Cut article really took the fun out of believing that Nick & Priyanka were part of an elaborate post-racial performance piece by an extremely rich person and for that I will never forgive."