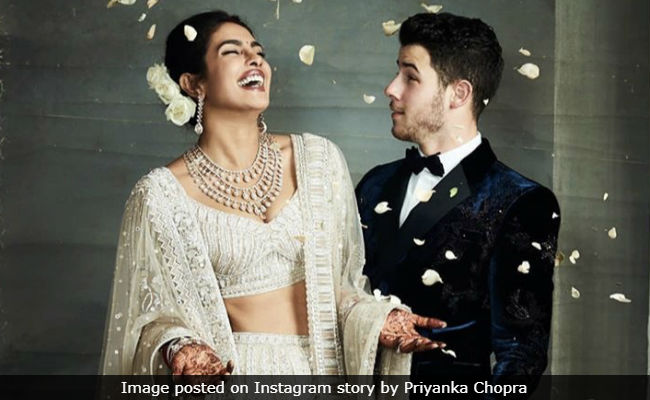 A picture of Priyanka Chopra and Nick Jonas from their Delhi reception. (Image courtesy: Instagram)

After an infuriated Internet pointed out that an article titled 'Is Priyanka Chopra And Nick Jonas' Love For Real?' was 'sexist, racist and disgusting' - Sonam Kapoor's words - The Cut has taken the offending article down and apologised. "An earlier story about Priyanka Chopra and Nick Jonas did not meet our standards. We've removed it and apologise," read a tweet on the official Twitter handle of The Cut. The article, which outraged social media, labelled Priyanka a 'modern-day scam artist' and also suggested that Nick Jonas had 'married into a fraudulent relationship against his will'. Both the writer of the article, Mariah Smith, and The Cut were buried under an avalanche of criticism. Actress Sonam Kapoor was amongst the many Twitter users, who responded angrily to the offensive piece. "For a publication that 'shows women what they are made of' The Cut has a lot to answer for. The article on Priyanka Chopra was sexist, racist and disgusting. Also it's written by a woman which is so sad. It reeks of envy and bitterness," Sonam tweeted.

Here is some of the judgement that the article passed on Priyanka, who married Nick Jonas in Jodhpur over the weekend. To start, it made the extraordinary leap of faith by taking Priyanka asking before they began dating Nick to text her directly instead of sending tweets her team had access to as proof that she intended to break his heart (which she clearly didn't, given the recent nuptials). Ms Smith made this point in the most insulting of terms: "Nick Jonas DM'd Priyanka on Twitter, and their exchange launched the very beginning of Priyanka's plan to make this Nick Jonas opportunity her forever bitch...Aside from the offensive Hollywoodness of Priyanka telling another celebrity that her "team" reads her direct messages, what she was really doing here was quite possibly dropping a hint to Nick that she was going to break his heart. Or, at the very least: She was indicating that he'd been added to the short list of Hollywood men that she and her team would test out for a possible romance."

As empirical evidence of the above, the writer cited Tom Hiddleston, with whom Priyanka Chopra co-presented an Emmy award. He seems to be the only name on her 'short list of Hollywood men to be tested for a possible romance.'

Next, Priyanka's confession that she 'works very hard to spoil herself' was connected to 'shopping around for the finer things in life while her team shops for finer men.' In one fell swoop negating her many achievements and feeding into the misogynistic trope in which successful women are shamed for spending their hard-earned money on themselves.

Meantime, Nick Jonas was cast as a hapless groom 'blinded by love' and unable to see through his bride's supposed machinations. Apparently, "All Nick wanted was a possible fling with Hollywood's latest It Woman, but instead he wound up staring straight at a life sentence with a global scam artist."

On Twitter, where Sonam led the charge, Mariah Smith was tagged to comments such as: "The sexism, racism and xenophobia really jumped out. You're so mad that a deserving Indian woman found someone who values her worth. The one time a South Asian woman is thriving in Hollywood after working so hard, she gets called a scammer. I hope you do some soul-searching." Another comment read: "Forget petty. This piece is problematic and embarrassing," while another user added: "Wow. Didn't really expect this type of narrative. Whether they're real or not, this article is a new low. Hope you find better things to write about."

For a publication that “shows women's what they are made of” @TheCut has a lot to answer for . The article on @priyankachopra was sexist , racist and disgusting. Also it's written by a woman which is so sad. It reeks of envy and bitterness. @mRiah shame on you! https://t.co/bmbbX7LrAT

The sexism, racism & xenophobia really jumped out lol. You're so mad that a deserving Indian woman found someone who values her worth. The one time a South Asian woman is thriving in Hollywood after working so hard, she gets called a scammer. I hope you do some soul-searching.

Wow. Didn't really expect this type of narrative. Whether they're real or not, this article is a new low. Hope you find better things to write about.

Oh good, let's have a woman (of color, no less) perpetuate the myth of an older foreign woman entrapping and corrupting the wholesome and naive white man.

Forget petty. This piece is problematic and embarrassing.

Disgusting - I get wanting the click bait, I thought there may be some depth hidden somewhere in this story, sadly not! Poorly written, does nothing for feminism, interracial relationships or a even for a fun read.

A quick glance through Wikipedia would have told the Ms Smith what she clearly ignored while writing her mean-spirited piece: that Priyanka Chopra is one of the biggest stars in the world, won Miss World, starred in over 50 Bollywood films, headlined her own US network show Quantico, was cast opposite Dwayne The Rock Johnson in Baywatch, has a musical career, is an UNICEF ambassador, has been on the Time 100 list, wrote for Meghan Markle when she was on the Time List, has made it to the Forbes global rich list, runs a successful production house, and has been decorated by the government. She really requires no defending on Twitter.

Priyanka Chopra and Nick Jonas' three-day wedding celebration concluded over the weekend. On Tuesday, a reception for the newlyweds was hosted in New Delhi, which was attended by Prime Minister Narendra Modi.