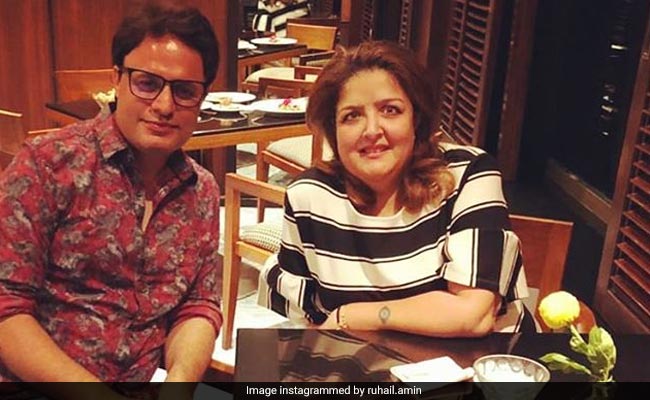 A tweet from journalist Ruhail Amin, the man who Hrithik Roshan's sister Sunaina claims to be dating, passed almost unnoticed by the media over the weekend. The tweet appears to respond to a Bollywood Hungama report from last week in which a source close to the Roshans said that Sunaina's parents were opposed to her alleged romance with Ruhail Amin because he is supposedly already married and not because he is Muslim, as she has claimed. In the carefully non-committal manner that has characterized all his responses so far, Ruhail Amin referred to 'fictional pieces floating around his personal life' and challenged the 'family source' to 'substantiate this gibberish.' He did not name Sunaina nor specify the nature of the gibberish. Read his tweet here:

Fictional pieces floating around my personal life are dumbed down versions of gossip journalism. I would like the so called "family source" who calls me "chap" for some strange reason to come out in the open and substantiate this gibberish. Will you?

Last week, Bollywood Hungama quoted a friend of the Roshans as saying, "This chap whom Sunaina is seeing is apparently married and has children. That's why Guddu and Pinky (Rakesh Roshan and his wife) are going nuts. Sunaina has already made monstrous marital mistakes. Her parents don't want her to end up making one more wrong choice of partner." The source also said that the Roshans were troubled by the fact that Ruhail Amin has failed to acknowledge publicly that he is dating their daughter - it is true that in the interview he gave News18 some days earlier described him as Sunaina's 'alleged boyfriend'; his own words, as quoted in the interviews, offered no confirmation that he was dating her.

Sunaina Roshan, 47, has made a series of allegation on Twitter and in interviews, backed up by actress Kangana Ranaut's sister Rangoli Chandel. Sunaina claims that her father Rakesh Roshan hit her because of her romance with a Muslim man and called him a 'terrorist'; she also claims that her brother Hrithik has not stood by her and failed to provide her with an apartment of her own; Sunaina also accuses her parents of not giving her enough money for her monthly expenses - the Rs 50,000 she gets isn't enough, she says, and 'as a Roshan' she feels she's entitled to more.

Controversially, Sunaina Roshan has sought out Kangana Ranaut for support - something that may not have benefitted her entirely since Kangana's sister Rangoli Chandel admitted in a tweet that the actress had blocked Sunaina. Rangoli has also claimed in a Twitter offensive that Sunaina's 'dangerous' and 'criminal' family sedate her; the Ranaut sisters have been accused by many on Twitter of exploiting Sunaina Roshan for personal gain - Kangana and Hrithik Roshan have long been locked in ugly battle over a romantic relationship that she claims happened, he claims didn't.

In a statement posted two weeks ago, Hrithik's ex-wife Sussanne Khan described Sunaina as being in an 'unfortunate situation.' Nobody other than Ms Khan and the unnamed family source have spoken on behalf of the Roshans. Sunaina Roshan, Hrithik's elder sister, has also dismissed rumours about ill-health and alleged bipolar disorder - a rumour that Rangoli Chandel claims Hrithik's PR is responsible for.