'Everyone can see the irony here,' said Ruhail Amin on being asked why the family would object given that Hrithik's ex-wife Sussanne Khan is Muslim 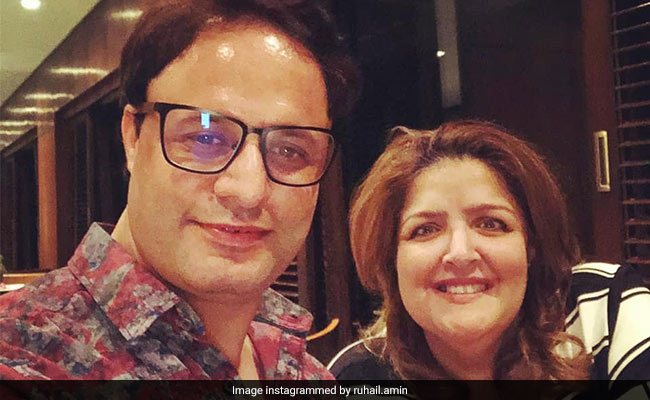 We've heard from Sunaina Roshan, Kangana Ranaut's sister Rangoli Chandel and Sussanne Khan. Now, Sunaina's alleged boyfriend Ruhail Amin speaks. Ruhail, a journalist, is at the centre of the complicated family drama that has unfolded on Twitter and in the media over the last eventful week. Sunaina, 47, has alleged that her family have been persecuting her for dating Ruhail Amin because he is Muslim; she has claimed that her father Rakesh Roshan hit her last year and called Ruhail a terrorist; she has also accused brother Hrithik Roshan of not standing by her and of failing to provide her with a home of her own. Sunaina's claims have been backed up in a barrage of tweets by Rangoli, whose sister Kangana is at daggers drawn with Hrithik.

Speaking to News18, Ruhail Amin claims he is being profiled on the basis of his faith. "This is unfortunate. Labelling someone extremist just because he/she belongs to a certain religion is simply outrageous and needs to be condemned in strongest words... Religions and geographies should not become the cornerstones of defining extremism; we need to move beyond that mindset. Most importantly, we need to stand up against ignorant viewpoints, whoever has them," Ruhail Amin says, "This incident has once again exposed the dark underbelly of identity politics at play in today's liberal times which are totally uncalled for."

Asked why the Roshans should object to him on the basis of religion given that Hrithik Roshan's ex-wife Sussanne was one, Ruhail Amin says, "Everyone can see the irony here."

The interview carefully skirts the issue of whether or not Ruhail Amin and Sunaina Roshan are actually dating. The interviewer writing the copy describes Sunaina as Ruhail's 'alleged girlfriend' and Ruhail himself refers to the rumoured romance in the most unspecific terms. He reveals that he met Sunaina Roshan while covering the entertainment beat for a national channel and later reconnected via social media - Sunaina Roshan has said she met him on Facebook.

Ruhail Amin does refer to a 'friendship' which prompted a strong reaction from the Roshans. "They did not approve of our friendship. I also got to know that her parents put a security ring around her post our friendship, and when she told me about it my first reaction was of disbelief and later a good laugh," he tells News18. His comment on Sunaina's future is non-committal: "She wants to restart her life on a positive note and wants her family to support her decisions," he says.

A week ago, Sunaina Roshan dismissed rumours of ill-health and bipolar disorder and then gave an interview to Pinkvilla claiming that her family were harassing her over her alleged romance with Ruhail. She also complained about being financially deprived by her brother and parents - Hrithik, she said, reneged on a promise to buy her a flat and also refused to pay a rent of Rs 2.5 lakh for an apartment she found herself in Lokhandwala; she claimed that the Rs 50,000 her parents had given her for the month's expenses wasn't enough and that 'as a Roshan' she was entitled to more. Sunaina Roshan, a cancer survivor, is believed to have been married twice and has a daughter who lives with her first husband.

Sunaina has also reached out for 'justice,' as she calls it, to Kangana Ranaut whose sister Rangoli has led a Twitter offensive against the Roshans calling them 'criminal' and 'dangerous.' She also alleged that Hrithik Roshan's PR was responsible for the bipolar rumour. Her barrage of tweets have mostly not been received in the spirit she intended, especially after she revealed that Kangana had blocked Sunaina; responses posted in the comments have accused her and Kangana of exploiting Sunaina's vulnerability for personal gain. It's no secret that Hrithik Roshan and Kangana Ranaut are bitter enemies - for the last couple of years, they have exchanged recriminations and legal notices over a disputed romantic connection.

Sussanne Khan, who divorced Hrithik in 2014 but remains very close to him and the family, posted a statement last week describing Sunaina as being in an 'unfortunate situation' and revealing that the Roshans were currently negotiating a 'tough period.' It is unclear whether Sussanne was speaking for the Roshans but it is the only comment approaching a family statement so far.