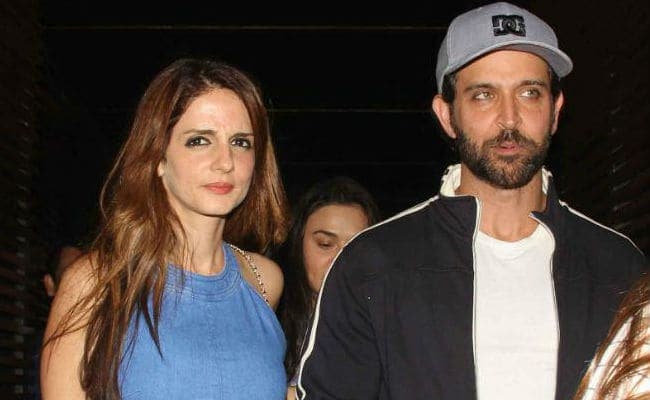 Hrithik Roshan's ex-wife Sussanne Khan had ended a day fraught with allegations of the most explosive sort about her former in-laws with a statement describing Hrithik's sister Sunaina, who is at the centre of the controversy, as a 'loving warm, caring person, who is in an unfortunate situation.' Sussanne also revealed that Hrithik and Sunaina's father Rakesh Roshan is 'undergoing a major health crisis' and that their mother Pinky is 'vulnerable.' Sussanne, who has two sons with Hrithik, said in her statement, "Please respect a family's tough period, each family goes through such times."

This morning, Kangana Ranaut's sister Rangoli Chandel claimed in tweets that the Roshans were 'physically assaulting' Sunaina over a romance they allegedly oppose and that Sunaina had been reaching out to Kangana for help. A day earlier, Sunaina tweeted about 'living in hell' and that she supported Kangana.

There has been no response from the Roshans; it's not clear if Sussanne Khan's statement should be seen as official word on behalf of the family. In her statement, posted on Instagram, she explains that she is speaking as 'someone who has been part of this family for long.'

Sussanne and Hrithik Roshan got married in the year 2000 and they got divorced in 2014. They are parents to two sons - Hridhaan and Hrehaan.

For about a week now, conflicting reports have been circulated about Sunaina Roshan's health. Some days ago, she spoke to Pinkvilla be dismissing a news report that claimed she had been critically ill in hospital and that she was bipolar. Soon after, Rangoli Chandel alleged in tweets that Sunaina had called Kangana Ranaut, with whom Hrithik Roshan has been publicly feuding, to apologise for not standing by her; Rangoli also claimed that the bipolar rumour had originated from Hrithik's PR machinery .

Don't act too smart @chakrabarti_r everyone isn't nice to their siblings, Hrithik Roshan's sister Sunaina Roshan has been calling and messaging Kangana and me only to apologise that she didn't stand up for her when Hrithik framed her as they were friends.... (contd) https://t.co/Ty2HwG7XLj

(Contd)..when Kangana &Hrithik were close, when Hrithik found out he & his PR tried to prove her a bipolar on a nervous breakdown, poor lady was so hassled with all the public shaming and blaming...(contd)

This morning, Rangoli Chandel made her explosive claims about the Roshans allegedly persecuting Sunaina:

Sunaina Roshan is asking Kangana for help, her family is physically assaulting her because she is in love with a Muslim man from Delhi, last week they got a lady cop who slapped her, her father also hit her, her brother is trying to put her behind bars..(contd)

(Contd).... I fear her dangerous family might harm her, we want to make this public because Sunaina calling Kangana and crying all the time, Kangana doesn't know how to help her...(contd)

(Contd).... so now she has blocked her number but we fear for her safety, everyone has a right to love whoever they want, hopefully this will scare Roshans and they back off

Sunaina Roshan's tweets from her unverified account appear to hint at Rangoli's allegations:

I support Kangana all through

Hrithik Roshan has not commented on or even acknowledged this fresh controversy. His last posts relating to Kangana were to announce that his new film Super 30 was being rescheduled to avoid a clash with Kangana's film in order to save himself 'personal trauma and toxic mental violence.'

Kangana Ranaut and Hrithik Roshan are co-stars from films such as Krrish 3 and have exchanged recriminations and legal notices over a disputed romantic connection.