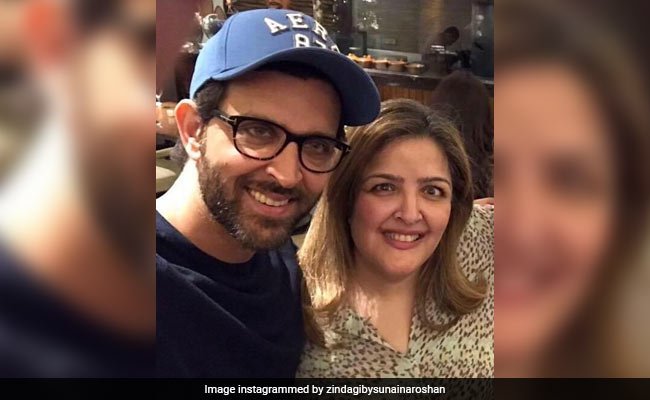 Sunaina Roshan, daughter of filmmaker Rakesh Roshan and sister of actor Hrithik, has suddenly become the focal point of controversy this week. After dismissing reports that she had been critically ill in hospital and was being treated for bipolar disorder, Sunaina Roshan has now become the subject of tweets by Kangana Ranaut's sister Rangoli Chandel who claims Sunaina apologised to Kangana for not standing by her while the actress feuded with Sunaina's brother Hrithik. Rangoli also suggested, quite without foundation, that the bipolar rumour originated from Hrithik's PR machinery, as punishment for Sunaina's alleged calls to Kangana.

First, some background - Kangana Ranaut and Hrithik Roshan have been locked in public battle for the last three-odd years over a disputed romantic relationship. They have exchanged recriminations and legal notices and the Roshans have also accused Kangana of stalking Hrithik.

Rangoli Chandel's tweets need to be seen in light of both this very ugly history as well as Sunaina Roshan's interview to Pinkvilla this week in which she acknowledged that all was not well between her and the family. In response to a comment on her tweet about Kangana helping her out with designing a new home, Rangoli disputed the suggestion that siblings look out for each other. In a series of posts, she said "Sunaina has been calling and messaging Kangana and me only to apologise that she didn't stand up for her when Hrithik framed her as they were friends" and that "when Hrithik found out he and his PR tried to prove her bipolar and on a nervous breakdown."

Don't act too smart @chakrabarti_r everyone isn't nice to their siblings, Hrithik Roshan's sister Sunaina Roshan has been calling and messaging Kangana and me only to apologise that she didn't stand up for her when Hrithik framed her as they were friends.... (contd) https://t.co/Ty2HwG7XLj

(Contd)..when Kangana &Hrithik were close, when Hrithik found out he & his PR tried to prove her a bipolar on a nervous breakdown, poor lady was so hassled with all the public shaming and blaming...(contd)

(Contd).... day before it was all over the media, so don't give this BS everyone is kind to their siblings.

On Sunday, Sunaina Roshan tweeted from her unverified account that she "didn't know (she) would have had the opportunity to visit hell in this lifetime."

Sunday thought .....didn't know that I would hv had the opportunity to visit HELL in this lifetime .....

Soon, a report about Sunaina, a cancer survivor, being bipolar and in hospital followed. Speaking to Pinkvilla, she denied having been ill and said she had been out partying with friends on the day she was reported to have been in hospital. Sunaina Roshan also dismissed the reports that she had been diagnosed with bipolar disorder.

In the same interview, however, Sunaina admitted that relations with her family were strained. Asked about her tweet, she told Pinkvilla, "It's what I am going through with my family...! It's living hell. Yes, there are certain issues, but please don't ask me to talk about this more as it's about my family and I don't want them to be affected further. All I can say is that I have been staying in a rented hotel apartment for the past 17-18 days before I came back home to stay in the same building as my parents. While I am staying in their home, I have a separate entrance and a separate floor on which I live."

Sunaina Roshan also claimed that the family has ignored her since the news report on her mental health: "Nobody has spoken to me. Nobody is in touch with me... It's sad but they are not even supporting me."

Hrithik Roshan has not so far responded to Rangoli Chandel's claim that he circulated the rumour about his sister's mental health. He has, in the past, put out carefully worded statements defending himself against the charges made by Kangana Ranaut. Most recently, he announced that he was rescheduling his new film Super 30 which was to clash with Kangana's Panga to avoid 'toxic mental violence.' His announcement was preceded by a series of tweets from Rangoli Chandel, who is also her sister's manager, accusing Hrithik of using Kangana as a 'punching bag' and warning against the actress being attacked or trolled.