"Just because Hrithik can't say anything to Ekta he will make Kangana a punching bag..." tweeted Rangoli Chandel 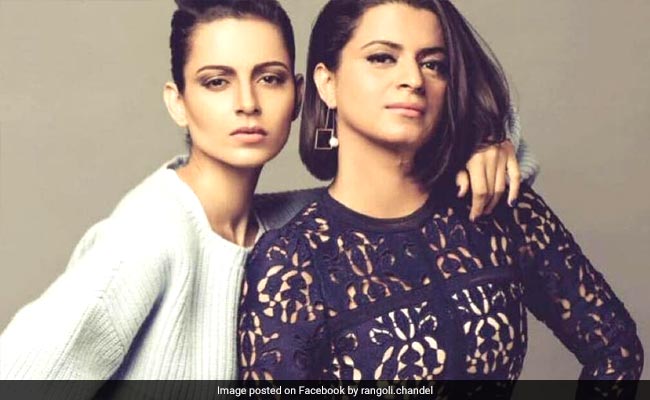 Hrithik Roshan's Super 30 and Kangana Ranaut's Mental Hai Kyaare bracing for a box office collision on July 26 but not without a few angry tweets from Rangoli Chandel. A day after Ekta Kapoor's Balaji Motion Pictures clarified that the decision to reschedule Mental Hai Kya's release was "purely for business prospects," she tweeted to say: "The ugly underground tweets have begun." Ekta Kapoor, who is producing Mental Hai Kya, seemed to be referring to the sudden barrage of tweets mentioning Hrithik and Kangana as part of what appears to be a paid PR exercise. In her tweet, Ekta did not take names but appeared to suggest that Kangana Ranaut should not be at the receiving end of provocative and negative tweets, reiterating it was her decision to shift the release date and not Kangana's.

"The ugly underground tweets have begun. I've promised to keep it clean and have assurances from my actors on the same. I hope personal assaults on them stop, because it's my decision and not theirs," Ekta wrote in her tweet. Netizens attached screenshots of some of the negative tweets in the comments section of Ekta's post.

The ugly underground tweets have begun. I've promised to keep it clean and have assurances from my actors on the same.
I hope personal assaults on them stop, because it's my decision & Not theirs.

Kangana's sister Rangoli Chandel responded to Ekta's tweets within minutes and launched a scathing attack on Hrithik Roshan, accusing him of trying to malign Kangana's reputation with negative PR. "What to expect from a man who always prefers to attack your back rather than meeting you in the battle field," read an excerpt from her tweet while another added: "Just because he can't say anything to Ekta he will make Kangana a punching bag? Well, you are mistaken." Rangoli also claimed that Kangana had even asked Ekta not shift the release date of Mental Hai Kya but the makers took a call only after consulting Hrithik.

What to expect from a man who always prefers to attack your back rather then meeting you in the battle field, jitna tu aur tera PR Kangana ko giraega utna he woh teri maregi.... so far it wasn't her concern magar ab tu dekh... Jadoo. https://t.co/D4GiBqWkbI

The makers of Kangana's Mental Hai Kya postponed the release date by a month - from June 21 to July 26 - recently, soon after which speculation was rife that it was a deliberate attempt to sabotage Super 30. A lengthy statement from Balaji Motion Pictures dismissed the rumours on Tuesday: "The shift in the release date is a decision taken after recommendations from the distributors, trade analysts and a top research team, keeping in mind the other releases a week before and after this date. We have thus been advised to shift the release of our movie to July 26, purely for business prospects."

Meanwhile, another set of rumours suggested that Hrithik was to shift Super 30's release to August but the makers set the record straight: "There is no change in the release date of Super 30. The film will hit screens on July 26, 2019." Super 30 was earlier supposed to clash with Kangana's Manikarnika but it was rescheduled.

There is no change in the release date of #Super30. The film will hit screens on 26th July 2019.@iHrithik@NGEMovies@mrunal0801@TheAmitSadh@nandishsandhu@Shibasishsarkar@MadhuMantena#SajidNadiadwala@super30film

Kangana Ranaut and Hrithik Roshan's public feud over an alleged affair took the Internet by storm all of 2017 when Rangoli Chandel was constantly at work as her sister's mouthpiece on Twitter. The controversy died down after Hrithik and Kangana sent each other legal notices asking for apologies.