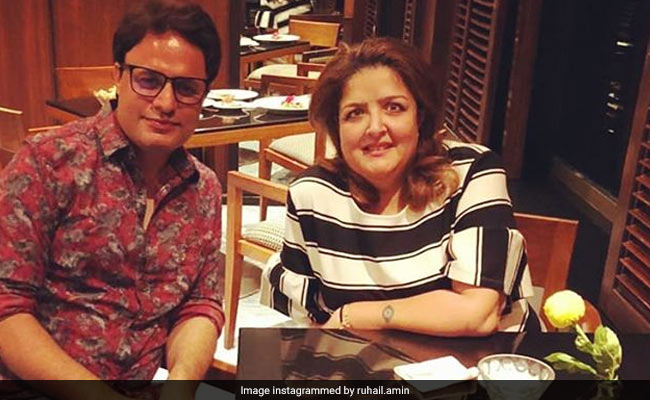 The turbulence in the Roshan family may be a result not of religious differences, as presented by Sunaina Roshan and Kangana Ranaut's sister Rangoli Chandel, but on the supposed marital status of Sunaina's alleged boyfriend, a report in Bollywood Hungama reveals. A source close to the Roshans - Sunaina is the daughter of filmmaker Rakesh Roshan and the sister of actor Hrithik - claims that Ruhail Amin, the journalist Sunaina says she's dating, is reportedly already married with children. Sunaina's parents simply want to protect their daughter, claims the source. The Roshans are also reportedly concerned about Ruhail Amin's failure to publicly acknowledge a romance with Sunaina.

Sunaina Roshan and Rangoli Chandel have both claimed that the Roshans object to Sunaina's alleged romance with Ruhail Amin because he is Muslim. Sunaina has claimed her father hit her and called Ruhail a terrorist. Family opposition, it now seems, could be based on Ruhail's unavailability as a potential groom. Speaking to Bollywood Hungama, the source says, "This chap whom Sunaina is seeing is apparently married and has children. That's why Guddu and Pinky (Rakesh Roshan and his wife) are going nuts. Sunaina has already made monstrous marital mistakes. Her parents don't want her to end up making one more wrong choice of partner." Sunaina Roshan, 47, is believed to have been married twice.

Days ago, Ruhail Amin spoke to News18 at length about identity politics and being profiled on the basis of his faith. Asked why the Roshans would object to Sunaina dating a Muslim when Hrithik was married to one (Sussanne Khan), Ruhail Amin said, "Everyone can see the irony here."

Ruhail Amin's interview to News18 was remarkable for his failure to confirm a romance with Sunaina. The interviewer used the phrase 'alleged boyfriend' and Ruhail was non-committal, to say the least, when referring specifically to Sunaina. Bollywood Hungama reports that Ruhail's distancing of himself from Sunaina has not escaped the Roshans. They are particularly troubled by his quote to Kashmir Life: "I have nothing to say (about) what is going on...Bollywood is a trivial place where people can write anything."

Sunaina Roshan has tweeted and given interviews about 'living in hell' and has also accused her family of financially depriving her: Hrithik broke a promise to buy her a flat and also refused to pay a rent of Rs 2.5 lakh, she claims; she also says that 'as a Roshan,' she is entitled to more than the Rs 50,000 a month her parents give her for expenses.

Sunaina Roshan has publicly allied herself with actress Kangana Ranaut, who has feuded bitterly with Hrithik Roshan for the last two years. On Twitter, Kangana's sister Rangoli Chandel has accused the Roshans of violence and of sedating Sunaina, calling them 'dangerous' and 'criminal.' She also admitted that Kangana has blocked Sunaina. Rangoli's tweets have been met with a barrage of critical responses, several of them accusing the sisters of exploiting Sunaina Roshan for personal gain.

Last week, Hrithik Roshan's ex-wife Sussanne Khan posted on social media about Sunaina's 'unfortunate situation' and the family's 'tough period.' There has been no official statement from the Roshans so far.