Sooryavanshi is slated to release on March 24 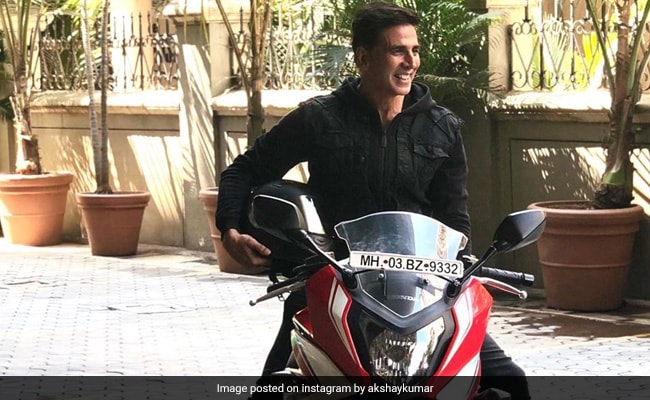 Akshay Kumar, who will be seen in the titular role in Sooryavanshi, ditched a helicopter for a bike to beat the Mumbai traffic to reach on time for the trailer launch. However, Ranveer Singh who plays a leading role in the film was 40 minutes late to the venue. He made up for his delay right away with an apology and sit-ups. Akshay Kumar shared a picture on his Instagram profile on Monday where he can be seen posing on a bike. He captioned it, "Veer Sooryavanshi ditched the helicopter for a bike to beat the Mumbai traffic for the Sooryavanshi trailer launch today." Meanwhile, a fan club dedicated to Ranveer Singh shared a video of Ranveer doing sit-ups after reaching late for the trailer launch. Have a look at both the posts here :

Sooryavanshi is the fourth installment of Rohit Shetty's police universe which stars Akshay Kumar, Ajay Devgn, Ranveer Singh and Katrina Kaif. Akshay Kumar who plays the role of Veer Sooryavanshi in Sooryavanshi shared a selfie from the trailer launch on his Instagram profile on Monday. In the selfie, he can be seen posing with Karan Johar, Ajay Devgn, Katrina Kaif and Rohit Shetty while Ranveer Singh clicks it. This is the picture we are talking about :

A few days ago, Akshay posted a video on his Instagram profile announcing the release date of the upcoming movie. Accompanying the post, the Rowdy Rathore actor wrote the caption: "Ain't no time for crime 'coz aa rahi hai police (There's no time for crime because police is coming). Sooryavanshi, releasing worldwide on March 24."

Besides Akshay, Ajay Devgn, Ranveer Singh and Katrina Kaif also shared the post on their respective Instagram profiles, announcing the release date of the film.

Sooryavanshi is directed by Rohit Shetty and co-produced by Dharma Productions, Reliance Entertainment and Cape of Good Films. It is slated to release on March 24.