Sooryavanshi: When Real And Reel Life Cops Akshay Kumar And Ajay Devgn Converged At A Marathon

"Where the police doesn't run after you but with you," wrote Akshay Kumar 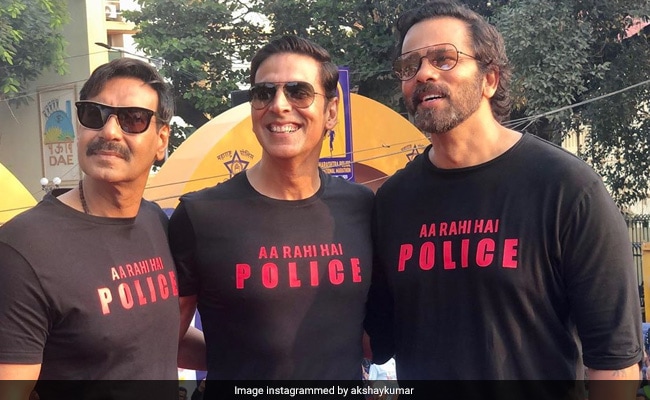 TeamSooryavanshi had a healthy start to their Sunday morning. How, you ask? Well, the actors went for the Maharashtra Police International Marathon and shared pictures from it on their respective Instagram profiles. The film's lead actor Akshay Kumar shared a picture along with his co-star Ajay Devgn and the film's director Rohit Shetty on his Instagram profile and he wrote: "Team Sooryavanshi at the Maharashtra Police International Marathon on this beautiful Sunday morning, a great initiative where the police doesn't run after you but with you." The 52-year-old actor accompanied the post along with the hashtags #AaRahiHaiPolice and #MarathonMovement.

Team #Sooryavanshi at the Maharashtra Police International Marathon on this beautiful Sunday morning, a great initiative where the police doesn't run after you but with you #AaRahiHaiPolice #MarathonMovement @itsrohitshetty @ajaydevgn

Sooryavanshi is the third film in Rohit Shetty's cop universe. Ranveer played the role of a police officer in the 2018 film Simmba while Ajay Devgn starred in the cop series Singham. In Sooryavanshi, Akshay will play the lead role of Veer Suryavanshi, a character that was introduced as an Anti-Terrorist Squad (ATS) officer in a cameo role in the 2018 film Simmba, which also starred Sara Ali Khan. Katrina Kaif will play Akshay's love interest in the film.

Ajay Devgn, who was last seen in the period drama Tanhaji: The Unsung Warrior, has films like Maidaan and Bhuj: The Pride Of India, in the pipeline.