"Thrice the fun, thrice the action and thrice the entertainment assured in the Rohit Shetty Cop Universe," wrote Ajay Devgn 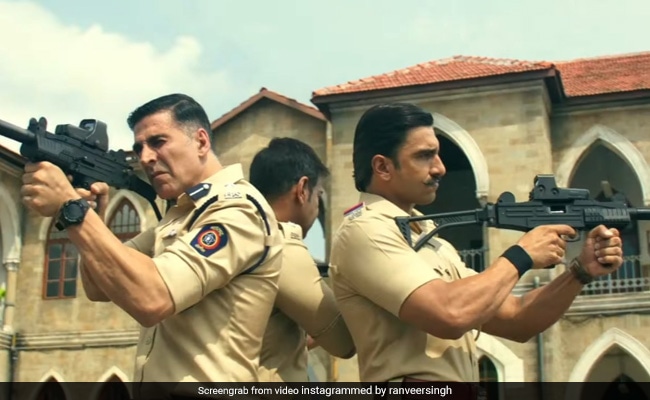 Rohit Shetty's Simmba completed one year on Saturday and on the occasion, super cops Akshay Kumar, Ajay Devgn and Ranveer Singh shared a teaser of Rohit Shetty's Cop Universe, which shows Singham (Ajay), Simmba (Ranveer) and Sooryavanshi (Akshay) coming together for the first time. Minutes after the actors dropped the teaser on the Internet, it went crazy viral and why not, it features the three super cops teaming up to take on the bad guys. We couldn't be more excited about it. Sharing the poster on social media, Akshay Kumar wrote: "#RohitShettyCopUniverse celebrates 1 year of Simmba with the power-packed trio Singham, Simmba and Sooryavanshi. Get ready...aa rahi hai police, March 27, 2020!"

Ranveer Singh and Ajay shared the same teaser on their respective social media profiles. Ajay wrote: "It doesn't get bigger than this. Thrice the fun, thrice the action and thrice the entertainment assured in the #RohitShettyCopUniverse with our favourite trio - Singham, Simmba and Sooryavanshi. Here's celebrating 1 Year Of Simmba" while Ranveer captioned his post: "Can't wait? Tell me something I don't know!"

The teaser starts with the journey of Singham and ends with glimpses of Singham, Simmba and Sooryavanshi taking on the bad guys side by side.

Without much ado, check out the teaser of Rohit Shetty's Cop Universe here:

Sooryavanshi also featured Katrina Kaif in the lead role. The film will star Gulshan Grover and Nikitin Dheer as antagonists. Akshay's character Veer Sooryavanshi was introduced as an Anti-Terrorist Squad (ATS) officer in a cameo role performed by him in Simmba. Sooryavanshi will open in theatres on March 27.