Sooryavanshi: Akshay Kumar Introduces Us To The 'Desi Avengers Of The Cop Universe' - Ranveer Singh And Ajay Devgn 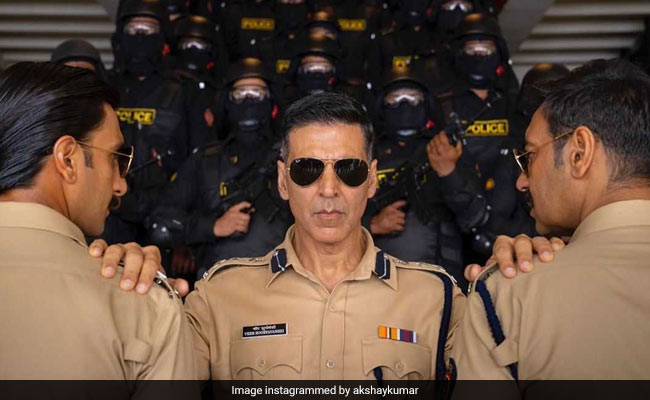 The makers of Sooryavanshi shared a brand new poster of the film and it is loaded with "desi Avengers of the cop universe" (Akshay Kumar's words). In case you still haven't figured out what we are talking about, we are referring to the stars of Rohit Shetty's cop universe. In the poster, Akshay Kumar aka Sooryavanshi can be seen posing along with Simmba aka Ranveer Singh and Singham (Ajay Devgn) - all dressed up as police officers, of course. Sharing the poster on social media, Akshay Kumar wrote: "The desi Avengers of the cop universe. When Bajirao 'Singham' meets Sangram 'Simmba.' Bhalerao meets Veer Sooryavanshi, expect not just fireworks but a full-blown blast on 27th March, 2020."

Without much ado, take a look at the poster of Sooryavanshi here:

The film will feature Katrina Kaif as Akshay's love interest. The film will also star Gulshan Grover and Nikitin Dheer as antagonists. Akshay will play the lead role of Veer Suryavanshi, a character that was introduced as an Anti-Terrorist Squad (ATS) officer in a cameo role performed by the Kesari star in Simmba. The film will be produced by Karan Johar's Dharma Productions.