"Akshay sir told me to remain calm and be confident. He doesn't shy away from doing any kind of action, which inspired me a lot," said Abhimanyu 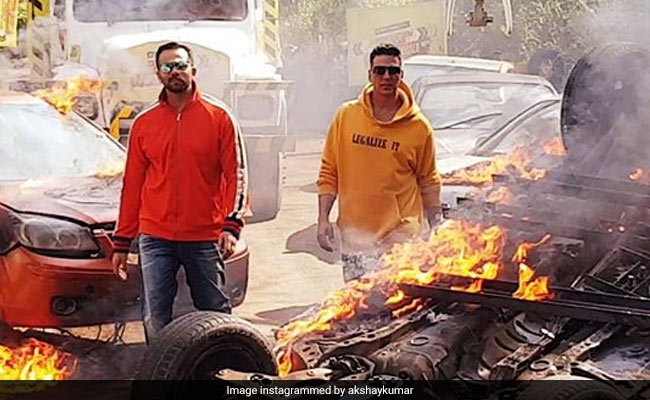 Akshay Kumar and Rohit Shetty, who are known for their excellent action skills, schooled Abhimanyu Singh while filming action sequences for Sooryavanshi. In an interview with Mumbai Mirror, Abhimanyu, who is playing an antagonist in the film, said: "For this film, I am jumping from one building to another and the elaborate action sequences are stretching up to 13-15 days of shoot. So, I was a bit nervous in the beginning, but Rohit sir made me comfortable and Akshay sir guided me well, even rehearsing the scenes with me and making sure that I remembered every move before the cameras rolled."

Elaborating more on the techniques taught by Rohit Shetty and Akshay Kumar, Abhimanyu said: "Rohit sir taught me how to maintain my balance and posture after a jump. For a sequence, where I was supposed to cross a huge gap between two buildings with the help of a ladder, Akshay sir told me to remain calm and be confident. He doesn't shy away from doing any kind of action, which inspired me a lot."

"Through the process I've learnt that it's more about the right technique than anything else. Now I can say that I'm more fearless," he further told the tabloid.

Abhimanyu Singh made his debut with the Rakeysh Omprakash Mehra-directed 2001 film Aks. He was last seen in late actress Sridevi's film Mom, which released in the year 2017. Other than Abhimanyu, Gulshan Grover and Nikitin Dheer will also be seen in negative roles in Sooryavanshi.

Akshay Kumar, who will be seen in the lead role in Sooryavanshi, frequently share glimpses of his stunts from the sets of the film. Check them out:

From the day acting became my destiny, action has been my lifeline. Pure, unadulterated action in #Sooryavanshi will tell you'll why it still fires up my core @itsrohitshetty @karanjohar @katrinakaif @rohitshettypicturez @reliance.entertainment @dharmamovies #CapeofGoodFilms

Casually hanging, off a helicopter...just another day on the sets of #Sooryavanshi P.S. Do NOT try this on your own, all stunts are performed under expert supervision

In Sooryavanshi, Akshay is playing the role of Veer Suryavanshi, a character that was introduced as an anti-terrorist squad officer in the Ranveer Singh-led 2018 film Simmba. Akshay is paired opposite Katrina Kaif in this film. Other than the aforementioned stars, Sooryavanshi also features Sikander Kher and Neena Gupta.

Directed by Rohit Shetty, Sooryavanshi is all set to release on March 27, 2020.