Here's Akshay Kumar's 'believe it or not' version of a Sooryavanshi video, take a look 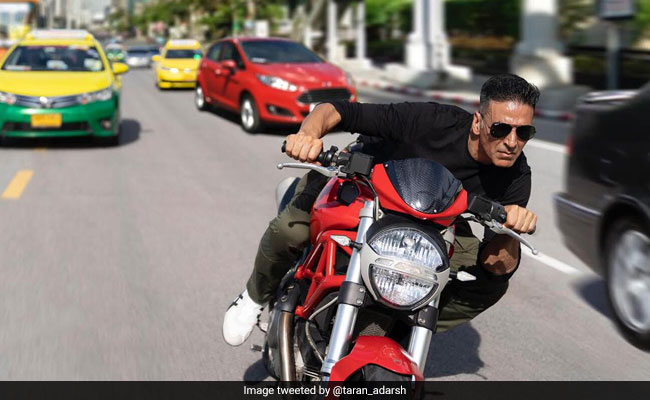 Akshay Kumar is spoiling fans with updates from Sooryavanshi sets. The recent one is an adrenaline-pumping video collage of high-octane action sequences from the film's sets. For the 51-year-old Bollywood khiladi, age is just a number as he continues to perform daredevil stunts in his films - something that "still fires up my core" (his words). In the caption to his stunt-special video, Akshay explained Sooryavanshi is the ultimate culmination of his love for action: "From the day acting became my destiny, action has been my lifeline. Pure, unadulterated action in Sooryavanshi will tell you'll why it still fires up my core."

In the video, Akshay can be seen performing stunts on bikes, taking screechy-risky turns when behind the wheel in signature Rohit Shetty car sequences and even boarding a flying chopper from a moving bike. He makes it look like a piece of cake but you can tell the difference for sure.

Here's Akshay Kumar's 'believe it or not' version of a Sooryavanshi video, take a look:

From the day acting became my destiny, action has been my lifeline. Pure, unadulterated action in #Sooryavanshi will tell you'll why it still fires up my core @itsrohitshetty @karanjohar @katrinakaif @rohitshettypicturez @reliance.entertainment @dharmamovies #CapeofGoodFilms

Looks like all of the above stunts can only be pulled off by someone who enjoys "casually hanging off a helicopter." Yep, that'll be Akshay Kumar.

Akshay Kumar also recently Instagrammed a note of gratitude for Sooryavanshi's action director Sunil Rodrigues with a post that would easily scare the living daylights out of the faint-hearted. "When your action is over and the only thing left to do is shoot the fight master. Sooryavanshi giving love to the big man with the golden head who kept us all alive during this epic crazy month," he wrote after a schedule wrap.

Directed by Rohit Shetty, Sooryavanshi is all set to hit screens on March 27, 2020.