In Akshay's post, the film's cast and crew can be seen literally pointing their guns at who appears to be action director Sunil Rodrigues. 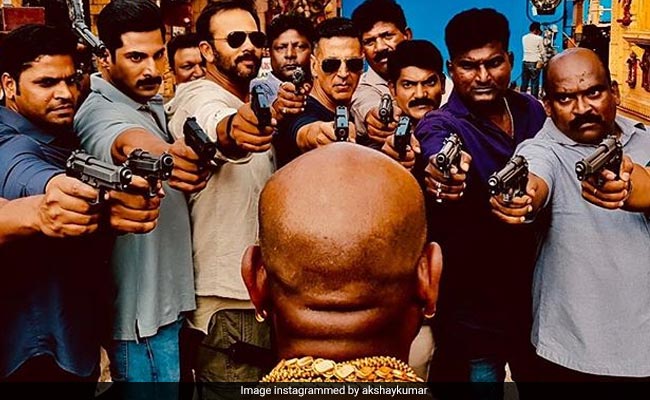 Akshay Kumar let us in on the sets of Sooryavanshi with yet another Instagram entry. Akshay Kumar and director Rohit Shetty, who had been shooting the cop drama in Hyderabad's Ramoji Film City for weeks, wrapped the Hyderabad schedule of the film and the 51-year-old actor marked the mile-stone with an interesting Instagram photo. In Akshay's post, the film's cast and crew can be seen literally pointing their guns at who appears to be renowned action director Sunil Rodrigues. According to Akshay Kumar, the idea behind this off-screen stunt is to "give love". Here's what he wrote in the caption: "When your action is over and the only thing left to do is shoot the fight master. Sooryavanshi giving love to the big man with the golden head who kept us all alive during this epic crazy month."

Action director Sunil Rodrigues has collaborated with Rohit Shetty for films such as Simmba, Dilwale, Singham Returns and Golmaal Again. He also has also choreographed action sequences for movies such as Happy New Year, Drishyam, Mukkabaaz, Pari and Zero among others.

Meanwhile, actor Vivan Bhathena, who co-stars with Akshay Kumar in the movie, also Instagrammed a similar photo and shared his experience of working with the superstar and director Rohit Shetty: "This is the best unit I've ever worked with. So confident and composed about everything they do and of course Rohit Shetty's practical jokes on set and Akshay Kumar's sense of humour just keeps you going even in 50 degree heat."

Lol..chor pakda gaya...#Schedulewrap for me. #Hyderabad #ramoji #sooryavanshi. Had the best time. This is the best unit I've ever worked with. So confident and composed about everything they do and ofcourse @itsrohitshetty practical jokes on set and @akshaykumar sense of humour just keeps you going even in 50deg heat. #blessed #actorslife #crazymadfun

Akshay Kumar co-stars with Katrina Kaif in Sooryavanshi and the film marks both stars' first project with Rohit Shetty. Sooryavanshi marks Rohit Shetty's fourth cop drama after the Singham series of films and Simmba. The film will release on March 27 to avert a box office collision with Salman Khan's Inshallah releasing on Eid.