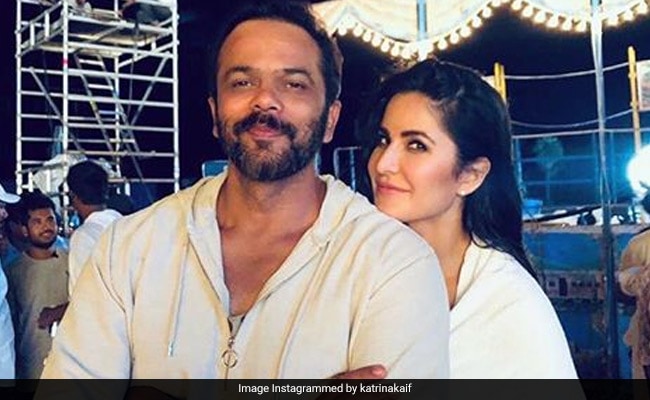 Katrina shared this pic with Rohit Shetty from the sets of Sooryavanshi. (Image courtesy: katrinakaif)

Katrina Kaif added another BTS picture to her 'towel series' from the sets of Sooryavanshi on Thursday and it seems the series is sort of completed as it features the film's director Rohit Shetty along with the 35-year-old actress this time. Katrina, who has been sharing a couple of her "night shoot" photos on her Instagram profile, kicked off the towel series a few days ago. Her series previously featured her co-star Akshay Kumar and filmmaker-choreographer Farah Khan. In the latest picture that Katrina shared, she can be seen draped in a towel while the director can be seen wearing a grey sweatshirt. The actress captioned the photo as: "The man, the magic, the movies. Rohit Shetty... #Sooryavanshi #nightshoots #towelseries." Katrina Kaif and Akshay have been filming for the reprised version of song Tip Tip Barsa Paani, a popular track from Akshay's 1994 film Mohra but more on that later. First, take a look at Katrina's latest "towel series" pic, which stole the show on the Internet by getting over four lakh likes in just a few hours:

Earlier in the day, a glimpse of Katrina Kaif's hardwork was shared by Farah Khan, who posted an adorable picture from her "3 am photoshoot" with Katrina and Rohit Shetty. "Some people dream of success...while others wake up and work hard for it! With the hardest working Rohit Shetty and Katrina Kaif...3 am photoshoot #Sooryavanshi #tiptipbarsapaani," Farah captioned the picture.

Some people dream of Success.. while others wake up & work hard for it!! With the hardest working @itsrohitshetty n @katrinakaif ..3am photo shoot #suryavanshi #tiptipbarsapaani

Earlier, Katrina shared a picture with Akshay Kumar, where the actors could be seen smiling with their heads wrapped in towels, from the sets of Sooryavanshi. For those who haven't seen the picture yet, check it out:

And, here's the photo the actress posted with Farah Khan.

Sooryavanshi will open in theatres on March 27 next year.