Katrina Kaif and Akshay Kumar were filming a song sequence. "Singing in the rain," Katrina captioned the post. 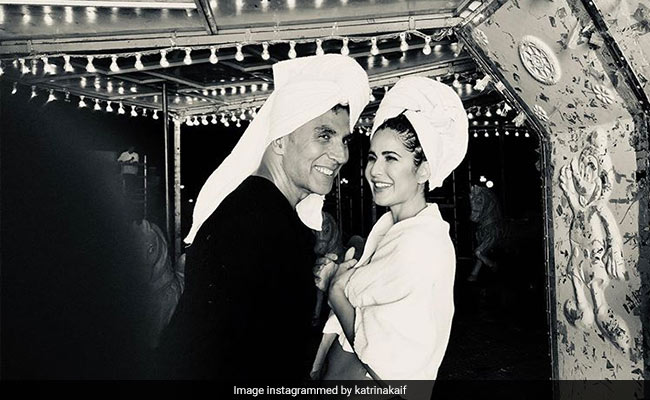 Katrina Kaif and Akshay Kumar on the sets of Sooryavanshi. (Image courtesy: katrinakaif )

Katrina Kaif shared a picture of herself with actor Akshay Kumar from the sets of their work-in-progress film Sooryavanshi, which hints about the inclusion of Tip Tip Barsa Paani redux in the movie. Akshay Kumar and Katrina Kaif, with their heads wrapped in towels, are all smiles for the camera. "Singing in the rain #sooryavanshi," Katrina captioned the post and tagged director Rohit Shetty along with Farah Khan, who is apparently choreographing the song. Last week, Akshay Kumar announced on Twitter that he bought the rights of his Mohra song Tip Tip Barsa Paani from Venus boss Ratan Jain and said, "I would've definitely been disappointed if any other actor would've recreated Tip Tip Barsa Paani, a song which has been synonymous with me and my career."

The Internet guessed that Akshay Kumar bought the rights for Sooryavanshi, which he is co-producing with Rohit Shetty.

Here's Katrina Kaif's update from the sets of Sooryavanshi:

Meanwhile, Sooryavanshi is the second spin-off from Rohit Shetty's Singham series, which is headlined by actor Ajay Devgn. Last year, Rohit Shetty directed Ranveer Singh in Simmba, in which Akshay's character Veer Sooryavanshi was introduced as an officer of the anti-terrorist squad unit.

Akshay Kumar and Rohit Shetyt have been filming Sooryavanshi in Thailand for quite some time now. Akshay and Rohit shared glimpses from the filming of Sooryavanshi on social media.

Casually hanging, off a helicopter...just another day on the sets of #Sooryavanshi P.S. Do NOT try this on your own, all stunts are performed under expert supervision

Sooryavanshi is scheduled for March 2020 release.