Sooryavanshi: Katrina Kaif Adds Another Picture To Her 'Towel Series,' This Time With 'Mummy' Farah Khan

"Me and mummy together after so long," wrote Katrina Kaif 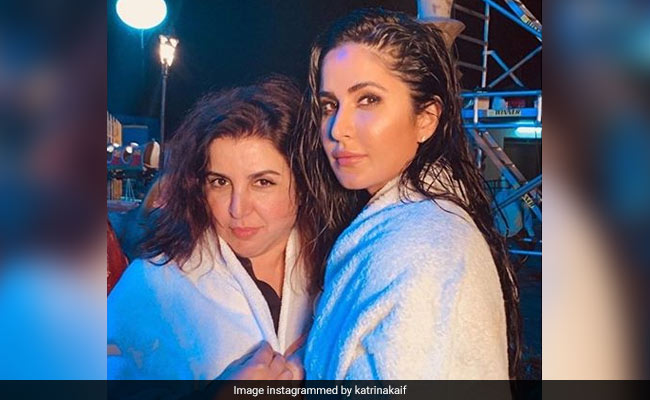 Katrina Kaif, who trended on the Internet on Tuesday after sharing a towel picture with her Sooryavanshi co-star Akshay Kumar from the sets of the film, treated her fans again by adding another photo to her Instagram "towel series." However, this time, the picture features the 35-year-old actress with Farah Khan, who is choreographing a song sequence for the film. Sharing a photo with the filmmaker-choreographer, in which both can be seen wrapped up in towels, Katrina wrote: "Me and mummy together after so long. Love you the bestest best. #sooryavanshi #towelseries" Farah's response on Katrina's latest post is also grabbing attention on the Internet, where the former complimented Katrina's "no nakhra" mood and called her "the best." The photo is winning hearts on social media as it got over six lakhs likes in just four hours.

Sharing the same picture, Farah Khan wrote an admiration note for Katrina and said that the actress can "walk through hell and still remain an angel." Her caption read: "Shooting with my darling Katrina Kaif... Her true beauty lies under the make up... She can walk through hell and still remain an angel... I love her and more importantly I admire her." Also, while Katrina's previous post with Akshay Kumar, where the actors could be seen smiling with their heads wrapped in towels, left the Internet wondering whether the duo were shooting for song Tip Tip Barsa Paani, Farah's hashtag #tiptipbarsapaani on her latest post confirms the news.

Shooting with my darling @katrinakaif .. her true beauty lies under the make up.. she can walk thru hell & still remain an angel.. i lov her n more importantly I Admire her #mummy #suryavanshi #womenilove #towelseries #tiptipbarsapaani

Also, check out the picture Katrina and Akshay, which the actress shared on Tuesday:

Last week, Akshay Kumar announced on Twitter that he bought the rights of his Mohra song Tip Tip Barsa Paani from Venus boss Ratan Jain. "I would've definitely been disappointed if any other actor would've recreated Tip Tip Barsa Paani, a song which has been synonymous with me and my career," he tweeted.

Sooryavanshi is being directed by Rohit Shetty and the film is slated to open in theatres on March 27 next year.