Akshay Kumar And Helicopter: A Stunning Glimpse Of The 'Last Stunt Of Sooryavanshi'

"It's been an incredible experience to be a part of Rohit Shetty's cop universe," said Akshay Kumar 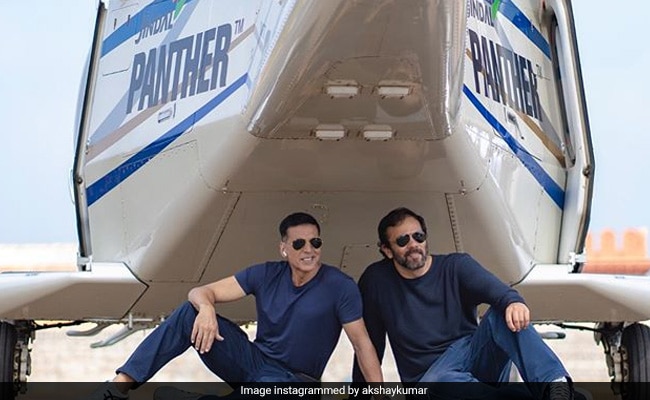 So, the last day on Sooryavanshi sets kinda looked like this - Akshay Kumar chilling with director Rohit Shetty and a helicopter on the runway. The 52-year-old Bollywood khiladi marked his last day on Sooryavanshi sets with a stunning photo, which came with an even more stunning caption, in which he revealed just the degree of thrill and excitement we should expect from the movie. In short, Sooryavanshi "will blow your mind". Here's what Akshay posted on Saturday evening: "Last day, last shot, last stunt of Sooryavanshi. It's been an incredible experience to be a part of Rohit Shetty's cop universe... We're excited for you to witness it at the cinema, it's gonna blow your mind we hope.

Last Day, Last Shot, Last Stunt of #Sooryavanshi It's been an incredible experience to be a part of Rohit Shetty's Cop Universe... We're excited for you to witness it at the cinema, it's gonna blow your mind We hope @katrinakaif @itsrohitshetty @karanjohar @reliance.entertainment @rohitshettypicturez @dharmamovies #CapeOfGoodFilms

Meanwhile, on his Instagram, Rohit Shetty wrote a lengthy note about last day of Sooryavanshi shoot coinciding with the announcement of Golmaal 5:

As Akshay Kumar gave his Last shot today for Our Cop Universe 'Sooryavanshi', It takes me back to 9 years ago in 2010 when Golmaal 3 became a massive hit. That day I had mentioned to Ajay Devgn that I was looking forward to making an action film on cops and eventually we made Singham. I never imagined that Singham's journey would ultimately weave in such magnificent characters like the notorious Ranveer Singh as Simmba and now the Dynamic Akshay Kumar as Sooryavanshi, becoming the country's First cinematic Cop Universe. And today 9 years later when I wrap my last shot with Akshay playing Sooryavanshi it magically coincides with the day we announce our next venture - Golmaal FIVE. AB ISSE LOGIC KAHO YA MAGIC, I don't know...All I can say is that DESTINY HAS A PLAN FOR EVERYONE SO, ZYAADA SOCHO MAT BAS KAAM KARTE JAAO! @akshaykumar @ajaydevgn @ranveersingh @katrinakaif @karanjohar @itsrohitshetty @rohitshettypicturez @reliance.entertainment @dharmamovies #capeofgoodfilms #sooryavanshi #golmaalfive

Well, Akshay Kumar's helicopter photo should not come as a surprise to those who have been keeping up with Sooryavanshi updates. Earlier in June this year, Akshay tweeted a just-another-day-on-sets kinda photo, in which he was just "casually hanging" off a helicopter. The caption was laced with Akshay's signature humour but also came with a warninf: "Casually hanging off a helicopter... Just another day on the sets of Sooryavanshi. Do not try this on your own. All stunts are performed under expert supervision."

Renowned action director Sunil Rodrigues designed the stunts for Sooryavanshi. And Akshay Kumar's way of thanking him was pretty scary we must say:

Akshay Kumar co-stars with Katrina Kaif in Sooryavanshi and the film marks both stars' first project with Rohit Shetty. Sooryavanshi is Rohit Shetty's fourth cop drama after the Singham series of films and Simmba. The film will release on March 27 next year.