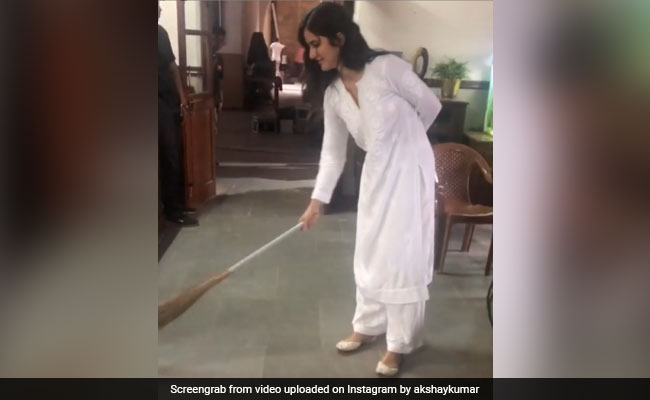 Katrina Kaif in a still from the video. (Image courtesy akshaykumar)

It's never a dull day on the sets of Sooryavanshi, thanks to Akshay Kumar and Katrina Kaif. Akshay's latest Instagram proves why. How, you ask? In the words of a F.R.I.E.N.D.S fan, let's just say that the actress channelled her inner Monica Geller and cleaned up the sets of the film with a broom. On Monday, Akshay posted a video from the sets of Sooryavanshi, in which Katrina, dressed in a white kurta-pajama set can be seen cleaning with a broom. "Katrina ji aap kya kar rahi hain?" Akshay asks Katrina in the video, "Saaf safai, zara hatiye," Katrina replied.

Sharing the video, Akshay Kumar wrote, "Spotted: The newest Swachh Bharat brand ambassador on the sets of Sooryavanshi." Check out the video here:

Spotted : The newest #SwachhBharat brand ambassador on the sets of #Sooryavanshi @katrinakaif #BTS

Last month, Katrina Kaif posted a happy picture from the sets of Sooryavanshi along with the film's director Rohit Shetty and her co-star Akshay and she wrote: "Perfect start to the year. Friends, laughs and smiles on sets with the best crew. Every day on set has been full of so much love and joy, just how films should be made. See you in cinemas on March 27."

A perfect start to the year ....friends , laughs , smiles , onset ....... the best crew entire team , everyday on set has been full of so much love and joy , just how films should be made .... see u in cinemas March 27 th #sooryavanshi @itsrohitshetty @akshaykumar

The film will feature Katrina Kaif as Akshay's love interest. The film will also star Gulshan Grover and Nikitin Dheer as antagonists. Akshay will play the lead role of Veer Suryavanshi, a character that was introduced as an Anti-Terrorist Squad (ATS) officer in a cameo role performed by the Good Newwz star in Simmba. The film is being produced by Karan Johar's Dharma Productions.