"See you at the theatres. Night or day," wrote the film's producer Karan Johar on Instagram 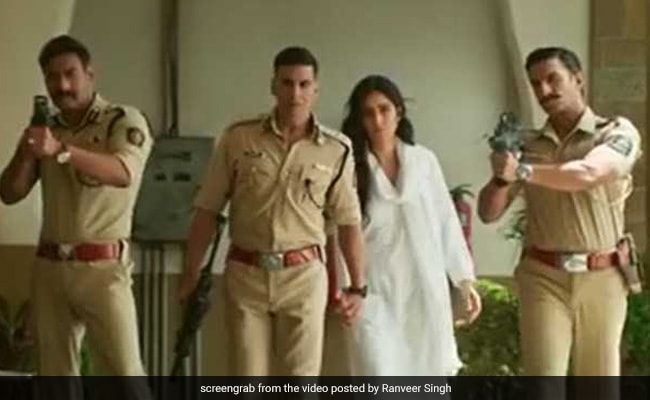 Akshay Kumar, on Monday, posted a video on his Instagram profile announcing the release date of his upcoming movie Sooryavanshi and we can't wait for it. In the video, Akshay Kumar, Ajay Devgn and Ranveer Singh can be seen walking with guns in their hands. We also got a glimpse of Katrina Kaif in the video. They announced the release date of the movie in the coolest way possible. In the video, they also mentioned that movie theatres in Mumbai will be open 24x7 post the release of the movie. Accompanying the post, the Mission Mangal actor wrote the caption: "Ain't no time for crime 'coz aa rahi hai police (There's no time for crime because police is coming). Sooryavanshi, releasing worldwide on March 24.

Besides Akshay, Ajay Devgn, Ranveer Singh and Katrina Kaif also shared the post on their respective Instagram profiles, announcing the release date and also revealing when the trailer of the much-awaited action drama will be out. While Ajay Devgn has worked with Rohit Shetty in the blockbusters Singham and Singham Returns, Ranveer Singh has starred as a cop in Rohit Shetty's 2018 action film Simmba. This movie is the fourth film in Rohit Shetty's police universe and will see Akshay Kumar in the titular role opposite Katrina Kaif.

Karan Johar, who is co-producing this movie with Rohit Shetty, Aruna Bhatia, Hiroo Yash Johar and Apoorva Mehta, shared the post on his Instagram profile and captioned it saying: "Who better than the indomitable trio of the Rohit Shetty universe to announce that Mumbai theatres will now be open 24x7, from March 24, 2020. See you at the theatres. Night or day!"

Sooryavanshi is directed by Rohit Shetty and co-produced by Dharma Productions, Reliance Entertainment and Cape of Good Films. It is slated to release on March 24.