Sonam Kapoor's Bikini Pounced On By Trolls. Will The Internet Ever Relax?

Sonam, who sports a black bikini, waves to the camera in the video shared by Swara Bhaskar 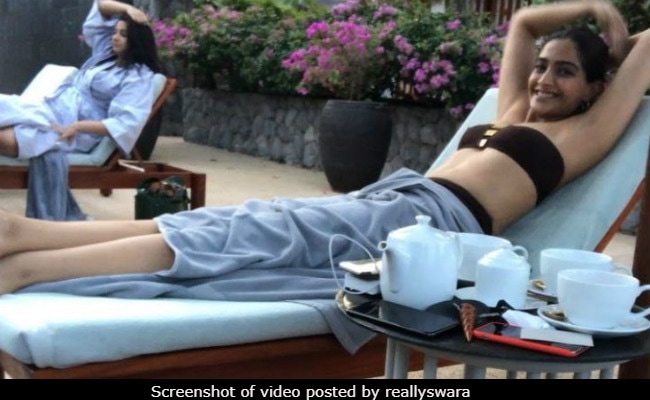 New Delhi: Sonam Kapoor is currently in Phuket with the team of her new movie Veere Di Wedding and sharing brilliant pictures from their boutique resort. But that's of least Interest to the trolls, who have found something on Swara Bhaskar's Instagram to troll Sonam about. Swara, who is Sonam's co-star of Veere Di Wedding, Instagrammed a short video documenting how the film's team unwound by the pool after a tiresome journey of flight hopping. Sonam, who sports a black bikini, waves to the camera while Sonam's sister and the film's producer Rhea can be seen chatting with Shikha Talsania, who also stars in the film. While most comments on the video ask about the fourth 'missing Veere' Kareena Kapoor, some body-shamed Sonam saying she's 'flat-chested.' Like, seriously?

"Sonam is so flat that she barely needs a bra..." read a comment while the others are way too nasty to be reproduced here but are proof about what's so wrong with the Internet.

Swara shared this video with a cute little caption, adding that Kareena is really, really missed: "When you are dog tired after a looooooong flight... actually two.. but still gotta chill out with your #Veere."

When u are dog tired after a looooooong flight.. actually two.. but still gotta chill out with your #Veere At @amanpuri #Phuket with @sonamkapoor @rheakapoor @shikhatalsania #VeereJustWannaChill missing #kareenakapoorkhan #VeereInThailand also yeah.. upside down video whatever!!!

Apart from Sonam, Bollywood actresses like Deepika Padukone, Priyanka Chopra, Taapsee Pannu, Esha Gupta and Fatima Sana Shaikh are only a few, who have also been subjected to trolling for their choice of wardrobe. Deepika was told to eat a burger because haters thought she looked "anorexic" on the cover of Vanity Fair's UK edition. In May this year, Priyanka was criticised for wearing a dress while meeting Prime Minister Narendra Modi in Berlin. Taapsee was accused of exploiting "freedom of expression" for sporting a bikini.

Promoted
Listen to the latest songs, only on JioSaavn.com
Trolls had also targeted Fatima during Ramzan and objected to disrespectful clothing during the festival - she wore a swimsuit. Esha Gupta was also slut-shamed for pictures from her recent photoshoots, in which she sported bold denim separates and lingerie.

Sonam Kapoor and team are currently in the second leg of Veere Di Wedding schedule. Directed by Shashanka Ghosh, the wedding drama will hit screens on May 18, 2018.