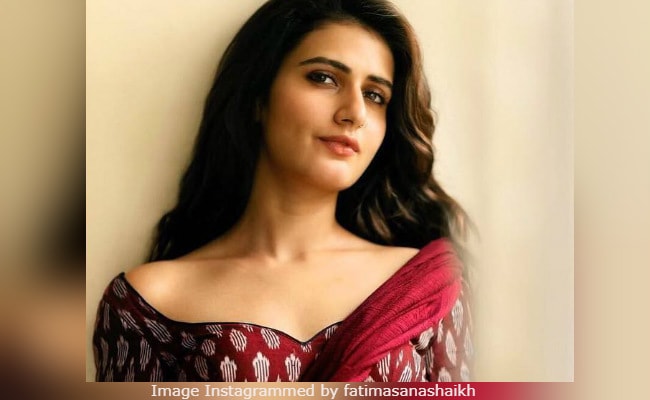 New Delhi: It appears Dangal actress Fatima Sana Shaikh dares doesn't really care much about trolls (who should, anyway?). The 25-year-old actress began trending after she shared a new photo of hers in a saree for the first time since she was trolled in October for the way she draped the nine-yards in a mirror photo of hers. Previously, Fatima's choice of words for the caption was: "Shameless selfie," but now, she kept it simple with credits to her team. For the recent photoshoot, Fatima opted for a printed blouse to go with a maroon saree, which is draped somewhat similar to the style she sported in the photo from October. Trolls being trolls, were quick to zero in on the photo for some crude comments but they have evidently been outweighed by the whole love of love Fatima received.

Of the 1,600 comments that poured in on her feed some asked if Fatima's shared this photo to garner attention while some added that it's because she doesn't have new projects to concentrate on. Dear trolls, Fatima is currently working on her second movie with Aamir Khan titled Thugs Of Hindostan, which also stars Amitabh Bachchan and Katrina Kaif. A select few asked her to keep her behaviour on social media in check citing her religion. But all of this was outnumbered by reviews like "bold", "pretty", "stunning" and "beautiful." One user wrote: "The word gorgeous can now officially be replaced by Fatima Sana Shaikh," while another added: "Such beauty on earth!."

This is Fatima's "shameless selfie" from earlier this year:

The trolls had also targeted Fatima during Ramzan and objected to what what they said was disrespectful clothing during the festival. Fatima, who was shooting for Thugs Of Hindostan in Malta, shared photos of herself in a swimsuit.

Promoted
Listen to the latest songs, only on JioSaavn.com
Here are a couple of more from Fatima's recent photoshoot:

Fatima Sana Shaikh made her full-fledged debut in Bollywood with Aamir Khan's Dangal and was quickly roped in for Vijay Krishna Acharya's Thugs Of Hindostan. The movie is scheduled to release in November next year.